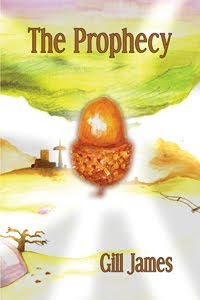 The Prophecy - Gill James
Pages: 367
Publisher: The Red Telephone
Release Date: 26th February 2008
Kaleem Malkendy is different - and, on Terrestra, different is no way to be.
Everything about Kaleem marks him out from the rest: the blond hair and dark skin, the humble cave where he lives and the fact that he doesn’t know his father. He’s used to unwelcome attention, but even so, he’d feel better if some strange old man didn’t keep following him around.
Then the man introduces himself and begins to explain the Babel Prophecy - and everything in Kaleem’s life changes forever.
The Prophecy has such a promising plot, but for me it just wasn’t executed well enough for me to enjoy it properly.
With science fiction I feel that there has to be a certain amount of exposition integrated into the story for it to make sense. You can’t magically understand what the author wants you to when they’re talking about something that they made up and when the world has been changed so drastically I want to know how and why. Preferably in more than just a simplistic sentence. I found this to be a major problem in The Prophecy. it may just have been me being dumb, but there were so many things central to the story, like the Stopes programme, although I worked out what it was, a bit of clarification would have been lovely.
I also had a bit of an issue with how The Prophecy read. I kept tripping over my tongue with names like Razjosh, Gabrizan and Marijam. I just had no idea at all how to pronounce them and it bugged me. Again, maybe it was me and I just wasn’t paying proper attention, but the prose sometimes felt sloppy and inconsistent. There seemed to be gaps that minor bits of information should have been included in to make the writing flow properly.
Though I had major with The Prophecy, I did love Gill James’ take on the Earth of the thirty-fifth century. It’s a world where a poison cloud has forced people underground and no one enters or leaves the planet until the cloud suddenly disappears. Now Terrestra, as Earth is now called, is filled with people paranoid about disease, scared of outside and wary of anybody different to themselves.
I think that with some polish and a really good editor, The Prophecy could be a brilliant novel. Hopefully you guys aren’t as picky as me and will love this!
For my 2010 100+ Reading Challenge
Sophie
Posted by So Many Books, So Little Time at 09:00
Email ThisBlogThis!Share to TwitterShare to FacebookShare to Pinterest