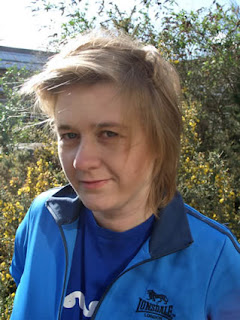 Saci Lloyd has worked as a cartoonist, toured the US with her band, ran an interactive media team and co-founded a film company. The Carbon Diaries 2017, the sequel to the critically acclaimed The Carbon Diaries 2015, was released in January.
1. Is there a specific time or place that you do your best writing in?
No, always and anywhere is good for me. Have learnt not to be picky.
2. Who were your favourite authors as a teenager? Are they different to your current favourites?
I've always liked humorists... Douglas Adams, Sue Townsend, Garison Kiellor, David Sedaris, Mark Twain... Recently really gotten into Douglas Coupland.
3. If you were only allowed to take three books to a desert isla 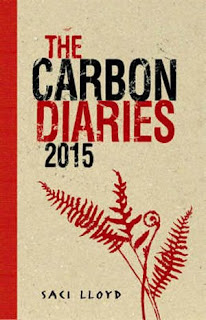 nd, what would they be?
Great Expectations, Huckleberry Finn, Generation X.
4. Is there a novel that you wish you’d written? Why?
Generation X. Very clever book, that.
5. What inspired you to write The Carbon Diaries?
Er, I wanted to write something about climate change that was funny. Didn't want to be all dystopian... it was more of an exploration of what happens when things get taken off you bit by bit. Everyone knows about polar bears and melting ice caps, but I wanted to write about getting to work and what happens in bars when the fridge gets turned off.
6. If you were in Laura’s position, would you react in the same way?
Yeah, she's not exactly a do gooder. She just wants her old life back, but knows she's got to face the music. I like her a lot. Some people think the second book's a lot heavier than the first, but in my mind I was just trying to imagine what it was like for a teenager when WW2 broke out. You've got no choice but to be dragged in. 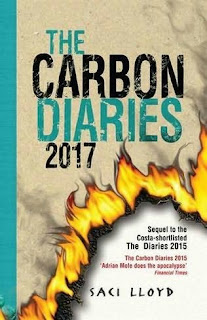 7. Do you think that carbon rationing is a possibility in the UK’s near future?
Without a doubt.
8. Are you working on anything at the moment? Can you tell us anything about it?
I'm on fire! Working on a near future novel set in London, but this time playing around with peak oil and what we do when the lights start to flicker. It's written in a completely different style, more like a thriller... and there's a lot of people hurling themselves around the place. Very exciting to write. It'll be out next spring.
Thank you very much, Saci! You can visit Saci at her website and read my review of The Carbon Diaries 2017 here.
Sophie
Posted by So Many Books, So Little Time at 09:00
Email ThisBlogThis!Share to TwitterShare to FacebookShare to Pinterest