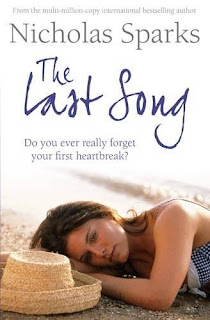 Other Titles by this Author: The Notebook, Message in a Bottle, A Walk to Remember, The Rescue, A Bend in the Road, Nights in Rodanthe, The Guardian, Three Weeks with my Brother, The Wedding, True Believer, At First Sight, Dear John, The Choice, The Lucky One


Seventeen-year-old Veronica ‘Ronnie’ Miller’s life was turned upside-down when her parents divorced and her father moved from New York to Wilmington, North Carolina. Since then she has remained angry and alienated from her parents, until her mother decides she should spend the summer with her father.
Ronnie’s father, a former concert pianist and teacher, is living a quiet life in the beach town. He is immersed in creating a work of art that will become the centrepiece of a local church.
What unfolds is an unforgettable story about love - first love and the love between parents and children - that demonstrates the many ways that relationships can break our hearts…and heal them.

The Last Song may be Nicholas Sparks’ fourteenth novel, but, damn, he’s still got it!

I should start this review by saying that I’ve loved Nicholas Sparks’ books for years so I may be a little biased! Then why, I hear you ask, did you wait until seven months after The Last Song’s release to read it? I think I know why. Nicholas Sparks’ first couple of books blew me away, but then the new ones just seemed to be okay. I guess I was worried that it wasn’t going to be as good as I wanted it to be. I really shouldn’t have worried.

I was hesitant in the beginning of The Last Song, though; it felt very different to his previous books. There were multiple points of view, one of them an angry teenager and not nearly as much focus on Christianity as I’ve come to expect. And then Ronnie met Will and began to forgive her dad. The Last Song turned out to have one of the strongest religious threads of his books (that I can remember) and though this would usually irritate me to death, I know and accept that it’s part of Nicholas Sparks’ books so it didn’t bother me much at all. The Last Song has actually turned out to be one of my favourites of his.

Something else that I love and is quintessentially Nicholas Sparks is the setting of North Carolina. And over the last fourteen books, a love of NC has been instilled me. I haven’t even been there. That’s the kind of writer he is. The small (and often coastal) towns of his stories have captured my imagination and my heart. They seem quaint, beautiful and full of a kind of energising life that makes me want to go there RIGHT NOW! It’s ridiculous for a book to make me want to live somewhere I haven’t even been, in a country I’ve never been to! But, hey, what can you do?

As well as all of these things, it’s the tragedy and love in his novels that keep me coming back for more. The way that Ronnie and Will begin to fall in love, trust each other and teach each other things about themselves that they never could have guessed is beautiful. But so is Ronnie’s relationship with her dad. Steve is the kind of dad you’d be proud of; the kind of dad that would go to the ends of the earth for his children without a word. Add in Nicholas Sparks’ trademark dose of tragedy and you get tears. Floods of them. At points I even had to stop reading and compose myself. But regardless, the beautiful, bittersweet ending left me with a smile on my face.

From my rather fan-girly review, I’m sure you won’t be surprised to hear that I’ve already pre-ordered Nicholas Sparks’ next two books. I really can’t recommend his books enough. Even if you only read YA, make an exception for Nicholas Sparks.