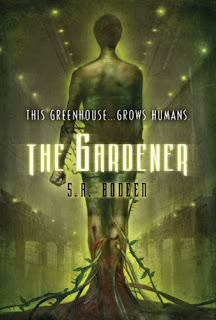 The Gardener - SA Bodeen
Pages: 232 (ARC)
Publisher: Feiwell and Friends
Release Date: 25th May 2010
Other Titles by this Author: The Compound
Be careful what you wish for…
Mason has never known his father, but longs to. All he has of him is a DVD of a man whose face is never seen, reading a children’s book. One day, on a whim, he plays the DVD for a group of comatose teens at the nursing home where his mother works. One of them, a beautiful girl, responds. She is part of a horrible experiment intended to render teenagers into genetically engineered, self-sustaining life-forms who don’t need food or water to survive. And before he knows it, Mason is on the run with the girl, and wanted, dead or alive, by the mysterious mastermind of this evil plan, who is simply called the Gardener.
Will Mason be forced to destroy the thing he’s longed for most?
The Gardener blew me away. It’s shocking, horrifying, involving and unbelievably clever.
Mason may just be the most un-hero-like hero I’ve come across in YA for a long time. And I like him a lot. He’s well over six foot, built like the Incredible Hulk and his face is marred by a disfiguring scar. And yet he’s quiet, kind and clever - a gentle giant with a hero complex. Mason acts on whim and instinct throughout The Gardener leaving himself as perplexed at his actions as I was. His mix of emotions for the girl - confusion, attraction, fear, a protective urge - made his journey so believable.
And it had to be because the storyline of turning humans autotrophic (being able to sustain themselves using sunlight, like plants) is out of this world. I knew vaguely what was going on from the book’s blurb, but the mysteries of TroDyn, Mason’s dad, the clinical trial and the girl kept me furiously turning the pages. I kept promising myself that I would only read one more chapter and then go to sleep, but I couldn’t. I read it very quickly, but for a book of just over 200 pages, it didn’t feel rushed or lacking in plot in the slightest.
The unveiling of all of the mysteries left me reeling. It was morbidly, horrifically, disgustingly fascinating and I couldn’t tear my eyes away from the page. And what made it worse was my paranoid line of though that someone like that could be going on under out noses and we’d have absolutely no idea it was happening. Then I started to think about the chemical research lab that’s across from my school and offers summer programs like TroDyn does. I really freaked myself out!
I loved The Gardener to bits and if I enjoy SA Bodeen’s first novel, The Compound, anywhere near as much, she could easily become one of my favourite authors.
For my 2010 100+ Reading Challenge
Sophie
Posted by So Many Books, So Little Time at 09:00
Email ThisBlogThis!Share to TwitterShare to FacebookShare to Pinterest