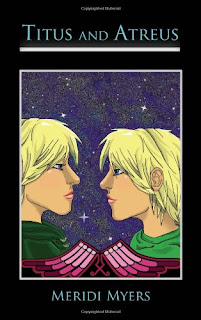 Grief-stricken by the loss of his parents, Titrus Attwater is convinced his life will never improve. His older sister ignores his calls, his grades in school have plummeted, and his house, once a place of warmth and security, is now lonely, cold, and alien.
But when a young man appears one night in Titus’s house, claiming he came in upstairs through the full-length mirror, Titus’s life gets turned upside-down. For, as Titus soon discovers, this intruder is not from Earth. Against his will, Titus is kidnapped and taken to another world, a place like Earth but markedly different. It is here where he will befriend angels, face assassins, and help a young prince unravel a prophecy that proves much darker and more twisted than any of them had imagined.

Titus and Atreus is a magical novel of dark prophecies, dangerous secrets and a deadly battle. I was surprised by how much I enjoyed it.
My favourite thing about Titus and Atreus is the characters. Titus and Atreus are twin souls consumed by fear and controlled by destiny. But they’re also selfless and brave. There is also Atreus’ bodyguard Juno (who reminds me a little of Valek from Maria V. Snyder’s Study trilogy) and intimidating healer Nightingale. Though it’s the Angels that stole the show for me. All seven angels have different, vibrantly coloured wings, flower-covered revealing outfits that correspond with their names (Lily, Rose, Tulip etc.), irritate Atreus to death and would do anything in their power to protect him. Put it this way, they’re not traditional angels by any means.
I also really loved the mythology. It’s completely original and like nothing I’ve ever come across before. The idea of travelling between worlds through mirrors is genius and I loved it. Twin souls who look and think alike and experience versions of the same things seems a really Doctor Who idea. And I’m rather fond of Doctor Who. The way that the lives of the characters are entwined is captivating and kept me guessing as to how events would play out through the novel.
I really enjoyed Titus and Atreus and I’ll be keeping my eyes open for more from Meridi Myers in the future.
For my 2010 100+ Reading Challenge
Sophie
Posted by So Many Books, So Little Time at 09:00
Email ThisBlogThis!Share to TwitterShare to FacebookShare to Pinterest