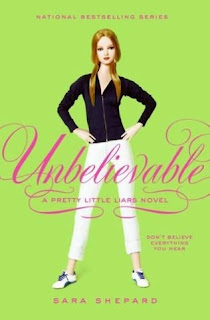 Unbelievable: A Pretty Little Liars Novel - Sara Shepard
Pages: 335
Publisher: Harper Teen
Release Date: December 2008
Other Titles in this Series: Pretty Little Liars, Flawless, Perfect, Wicked, Killer, Heartless (19/01/10), Wanted (29/06/10)
!SPOILER ALERT! DON’T READ THE BLURB IF YOU HAVEN’T READ THE REST OF THE SERIES BUT INTEND TO. THE REVIEW IS SPOILER FREE THOUGH!
Four pretty little liars’ charmed lives have turned into living nightmares.
Emily’s been shipped off to Iowa to live with her über-conservative cousins. Aria’s boyfriend is behind bars - because of her. Spencer’s afraid she was involved in Ali’s murder. But Hanna’s fate is far worse: She’s clinging to life in hospital because ‘she knew too much’.
If these girls don’t start listening to me, Hanna’s going to look like the lucky one.
- A
Unbelievable is the thrilling fourth instalment of the addictive Pretty Little Liars series.
We saw a lot more of Ali in Unbelievable. Spencer, Aria, Emily and Hanna thought about her a lot so we saw her in flashbacks, memories and dreams. While I was reading these I was just so shocked that she actually had any friends; she was a nasty piece of work! I did like seeing how the girls were similar and how they had changed since Ali’s disappearance, though. Especially Hanna. At times it was like she was a completely different character.
The biggest thing that happens in Unbelievable is the reveal of A’s identity and Ali’s murderer. And I’m proud to say that they were both on my (very long!) list of suspects and there are plenty of other twists and turns that completely throw you off track. I never know what to expect from the next page in this series.
As much as I loved Unbelievable, I did have a few minor problems with it. My favourite of the four girls is Aria and there weren’t very many of her chapters. It seemed like she was being pushed back a little. This made me sad as I love Ezra and Aria’s quirkiness really sets her apart from the other three. The other little niggle I had was the tons of exposition. I know it’s the fourth in the series and that you need to know a lot to get Unbelievable, but it just on my nerves as I read them all consecutively and didn’t need a recap. You never know, I might love it in a few books time!
I love this series and I can’t wait for book five, Wicked, to drop through my letter box so I can see what those pretty little liars get up to next.
Sophie
Posted by So Many Books, So Little Time at 09:00
Email ThisBlogThis!Share to TwitterShare to FacebookShare to Pinterest