Beautiful Dead: Arizona - Eden Maguire
Not alive. Not dead. Somewhere in between lie the Beautiful Dead.
There’s been no sign of the Beautiful Dead for weeks. Darina achingly misses Phoenix all over again. Surely he will return to help her solve the remaining mysteries.
It’s been a year since Arizona drowned in Hartman Lake. Suicide, it would seem. But something doesn’t add up… Drowning herself in a lake does not sound like strong, confident Arizona: Ellerton High School’s high-maintenance drama queen.
Darina must help Arizona the way she helped Jonas. But invisible wings are beating, the Beautiful Dead are in danger and time is running out…
I really enjoyed the first one so I’m looking forward to seeing how Darina solves Arizona’s mystery. 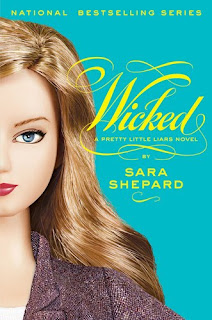 Wicked: A Pretty Little Liars Novel - Sara Shepard
In idyllic Rosewood, Pennsylvania, four very pretty girls just can’t help but be bad…
Hanna will stop at nothing to be Rosewood’s queen bee. Spencer’s digging up her family’s secrets. Emily can’t stop thinking about her new boyfriend. And Aria approves a little too strongly of her mom’s taste of men.
Now that Ali’s killer is finally behind bars, the girls think they’re safe. But those who forget the past are condemned to repeat it. And they should know by now that I’m always watching…
- A
I’m in love with this series!
Sophie
Posted by So Many Books, So Little Time at 08:00
Email ThisBlogThis!Share to TwitterShare to FacebookShare to Pinterest