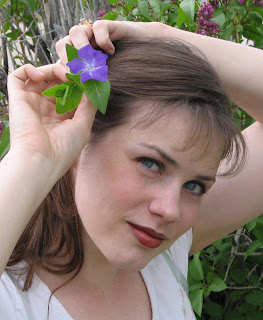 Aprilynne Pike has a BA in Creative Writing but when she’s not writing she can be found reading, acting singing or at the gym. Wings is Aprilynne’s first book and the first in a four-book series.
1. Is there a specific time or place that you do your best writing in?
I really like to go out to restaurants and write with something yummy at my elbow and with a server to refill my Diet Coke. :D But since I would weigh eight hundred pounds if I did that every day, I instead mostly write in my office (I have an office! Yay!) with something to drink at my elbow (usually Diet A&W) and sometimes with something playing very quietly on my ipod.
2. Who were your favourite authors as a teenager? Are they different to your current favourites?
I adored V.C. Andrews and Christopher Pike (no relation) when I was a teenager. I also liked AVI and Mary Higgins Clark. I still read Mary Higgins Clark pretty often, but I find myself gravitating toward more modern fantasy authors these days. I love Janni Lee Simner, Carrie Ryan, Michael Grant, and JK Rowling just to name a few. (I have like thirty favorite authors.:D)
3. If you were only allowed to take three books to a desert island, what would they be? 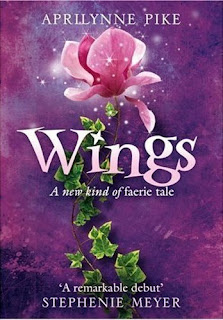 Oh man. The Giver, by Lois Lowry, The Cradle Will Fall, By Mary Higgins Clark, and Stardust by Neil Gaiman. Ask me next week and I'll probably give you three different titles. :D
4. Your fairies are very different from most others in YA at the moment. Where did you get the inspiration for their mythology from?
I don't know.
You probably want a longer answer than that.:) I decided that I wanted to write a YA faerie book, but I also decided I wanted to do something different than anything anyone else was writing. So I spent a long, rather sleepless night trying to come up with an original mythos. Finally, at like four in the morning, I came up with this idea of this goth faerie who lived with these three old women and couldn't go out after midnight because there was no power from the sun. It was like this goth Goldilocks and the Three Bears meets Cinderella meets Superman. And let's just say that ideas that sound great at four in the morning don't always sound so great at eight.:) But from the idea that faeries got their power from the sun led me to the idea that it could be because they photosynthesize. From there I just started asking about a zillion, "Well then how...?" questions that led to the mythos you'll find in my book.
5. Have you also been fascinated with fairies?
Always. I have always adored faeries. Pretty much any kind of faeries. Even now I still read a ton of books about faerie both for research and for fun
6. Why did you choose to write for young adults?
It kind of chose me. I was actually about halfway through a different book when I stopped it to write Wings. It was YA and I was really having a great time with it! Except that it didn't have . . .oh . . . a plot.:D So while I was trying to figure out what the heck happened in that book, I started writing Wings. And I started it as a teen book. And it just worked. I have since finished the other book and written the next two in the Wings series and I just love writing for teens! It works for me. 7. I loved all of the myths, legends and stories that were weaved into Wings. Was there a particular reason for their inclusion?
In my opinion, the best mythos twisting is based on actual lore and legend. It's like the old writing rule that says you have to know the rules before you can break them effectively. I have done so much research into traditional faerie lore in order to twist my mythos the way I have. The reason for that is that I wanted my interpretation to fit into the traditional lore. I wanted Laurel, and my readers, to see how the "true" mythos in my book could show how the faerie lore we have today could easily be misinterpretations. The wings, for example. The blossoms in my book look very much like wings so it is clear why people thought they had wings. While I certainly don't want to replace the traditional lore, I did want to weave my mythos around it. And Wings is just the tip of the iceberg, so to speak. You will see so much more lore and legend twisting in the next three books. Just wait till you see my Seelie and Unseelie courts.:D

8. Are you working on anything at the moment? Can you tell us anything about it?
I am currently working on the third Wings book, and am just about ready to hand it in to my editor. After that I will be working on a non-Wings book until I get edits back for book three. I have a couple of ideas for what I'd like the next book to be, but I haven't actually decided yet. I better get cracking!
Thank you very much, Aprilynne! You can visit Aprilynne at her website and read my review of Wings here.
Sophie
Posted by So Many Books, So Little Time at 09:00
Email ThisBlogThis!Share to TwitterShare to FacebookShare to Pinterest