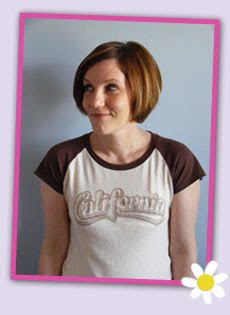 Hayley Long studied at English Aberystwyth University and later became a teacher. Lottie Biggs is (Not) Mad is her most recent novel.
1. Is there a specific time or place that you do your best writing in?
Yes. I split my week between teaching English in a sixth form college and writing. So on the days when I’m not talking to A Level students about dynamic verbs and extended metaphors, I sit and tap away on my computer. I’ve got a little room I write in at the front of my house. It’s a bit scruffy in there to be honest. When I’m working on a book, I tend to have piles of paper and other books everywhere. And empty mugs. And biscuit wrappers. That little room does the job though.
2. Who were your favourite authors as a teenager? Are they different to your current favourites?
That’s a good question. Who were they? [Insert long hard think] I used to read all the time. Anything I could get my hands on. I loved The Hobbit by Tolkien and I loved stuff by the Brontë sisters, particularly Jane Eyre and Wuthering Heights. There was A LOT of angst and drama in those books. Although, at the time, I completely missed the point that the men in those novels are all pretty much selfish or useless. I actually thought Heathcliff was sweet! I read Wuthering Heights again a few years ago and was shocked by how incredibly vile he is. What on earth did Cathy see in him?
My favourite books though were the Adrian Mole books. Me and Adrian are practically the same age! I remember reading The Secret Diary of Adrian Mole Aged 13 and 3/4 when it came out and laughing so much. It also seemed incredibly rude to me at the time and I liked that aspect of it because I’m a smutty little person deep down. J I still love the Adrian Mole books. Those and Holes by Louis Sachar. They are my all-time favourite YA books.
3. If you were only allowed to take three books to a 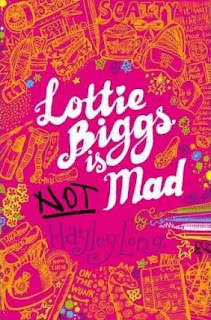 desert island, what would they be?
Ok, assuming that Adrian Mole and Holes are there already, buried under a palm tree somewhere, I’d take:
The Twits by Roald Dahl. This book makes me laugh whenever I pick it up. Any book which has a chapter that starts…’To pay her back for the glass eye in his beer…’ is always going to be a winner with me. I love Roald Dahl.
To Kill a Mockingbird by Harper Lee. Harper Lee only ever wrote this one novel. I don’t blame her. How on earth do you follow such a masterpiece? The characters in this book are so clear and rich and I love all of them. Even horrible old Mrs Dubose who sits on her porch and shouts things like, ‘Don’t you say ‘hey’ to me you ugly girl!’
Some kind of survival manual. I’m not a practical person and I’m hopeless at cooking. I really don’t think I’d survive for long on that island if I didn’t have some clue about what to eat and how to look after myself.
4. Was Lottie Biggs is (Not) Mad inspired by your life?
In places. When I was a teenager I worked in a rubbish shoe shop like the one in the novel. It was actually the best job ever. Me and my friend had a hilarious time. And Lottie is a lot like me. She looks like me and she thinks like me and she laughs at the same things as me. But, luckily, I don’t have the same problems that she has. And I’ve never had a horde of stolen goods in my wardrobe.
5. What was your road to publishing like?
Well, until a couple of years ago, I was living in Wales and my first novels were published by a small Welsh publisher. This was fantastic for me because it’s so hard to get your work into print and being part of the Welsh literary scene helped me to gain confidence and develop as a writer before daring to try to find a bigger publisher. I’d written several novels by the time Lottie Biggs came along. Without the support of all those people in Wales, I might have given up writing long ago. For most writers, it’s a massive struggle to find anyone who wants to read what you’ve written. It was for me too. The important thing is never to give up and to accept constructive criticism when it’s given to you.
6. I loved the fact that Lottie’s story was told through a piece of coursework. Where did the idea for this come from?
The idea just naturally evolved as I was writing. Personally, I’ve always found novels written in the first person viewpoint slightly worrying. I’m always thinking: But who is the narrator talking to? I know it’s art and I shouldn’t be worrying my head with such questions but I can’t help it. So I wanted to give Lottie a clear focus and purpose. And as I’m a teacher, the subject of coursework is never far from my mind. 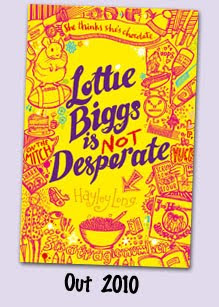 7. There were darker undertones to Lottie Biggs is (Not) Mad that that made it very different from the usual teen comedy. Was this something you set out to do when writing it?
Yes. As I said earlier, I’m NOT Lottie Biggs. But I’m not ashamed or embarrassed to admit that, from time to time, I’ve experienced feelings of total miserabledom. Luckily, never so bad or so enduring that I’ve needed to go to the doctors and get help. And most of the time, I’m a very cheerful, noisy and upbeat person. But that’s half the problem. If you’re a smiley person, everybody notices when you don’t feel so positive. I suppose there have been occasions when I’ve been hard work to be around. I wanted to show that nothing is simply black and white. People cannot be neatly categorised as sane or insane. Mental health is not about strength or weakness of character. One in four people is likely to experience symptoms of mental illness during their lives. For me, I’ve occasionally felt crushingly hopeless; for some people, it’s much more serious than that and they are diagnosed as suffering from an actual disorder. I wanted to take the stigma away from the subject and also send a positive message to young people. A few people have criticised me for treating the subject too lightly. Of course, mental illness can be very serious, very terrifying and very difficult to live with. I’m aware of this, my character, Lottie, is aware of this and I think most young people are aware of this too. We hear frightening stories in the media about people with serious mental problems all the time. I wanted to redress the balance a little and remind my readers that mental illness covers a vast scale of experiences and many people learn to manage their condition just as they might manage asthma or diabetes. I wanted to write something with a hopeful and positive message.
I also wanted to write about Jimi Hendrix, Edvard Munch and Stevie Smith. Most other teen books don’t include cultural references of this sort.
8. Are you working on anything at the moment? Can you tell us anything about it?
I’ve just finished writing the second Lottie book. Lottie Biggs is Not Desperate will be out next May. It’s centred on Lottie’s relationship with Gareth Stingecombe. I think it’s funnier than the first book – but that’s not really for me to say, is it? It’s also very cheekily rude in places. Definitely for teens and older, that one. Right now, I’m working on completing the trilogy. The third Lottie book is going to be a bit more serious, full of philosophy and, hopefully, by the end will see Lottie taking that mental step which shows she is a young adult and not a child anymore.
Thank you very much, Hayley! You can visit Hayley at her website and read my review of Lottie Biggs is (Not) Mad here.
Sophie
Posted by So Many Books, So Little Time at 09:00
Email ThisBlogThis!Share to TwitterShare to FacebookShare to Pinterest