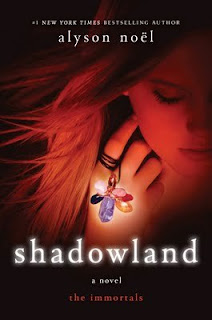 Shadowland: The Immortals - Alyson Noël
Ever and Damen have travelled through countless past lives - and fought the world’s darkest enemies - so they could be together forever. But just when their long-awaited destiny is finally within reach, a powerful curse falls upon Damen…one that could destroy everything. Now a single touch of their hands or a soft brush of their lips could mean sudden death- plunging Damen into the Shadowland. Desperate to break the curse and save Damen, Ever immerses herself in magick - and gets help from an unexpected source - a surfer named Jude.
Although she and Jude have only just met, he feels startlingly familiar. Despite her fierce loyalty to Damen, Ever is drawn to Jude, a green-eyed golden boy with magical talents and a mysterious past. She’s always believed Damen to be her soul mate and one true love - and she still believes it to be true. But as Damen pulls away to save them, Ever’s connection with Jude grows stronger - and tests her love for Damen like never before…
I’m so excited to read this after the shock ending of Blue Moon. 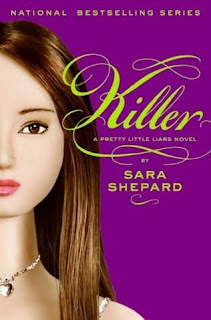 Killer: A Pretty Little Liars Novel - Sara Shepard
In picture-perfect Rosewood, Pennsylvania, ash-blond highlights gleam in the winter sun and frozen lakes sparkle like Swarovski crystals. But pictures often lie - and so do Rosewood’s four prettiest girls.
Hanna, Aria, Spencer and Emily have been lying ever since they became friends with beautiful Alison DiLaurentis. Ali made them do terrible things - things they had to keep secret for years. And even though Ali was killed at the end of seventh grade, their bad-girl ways didn’t die with her.
Hanna’s on a mission to corrupt Rosewood’s youth, starting with a very attractive sophomore. Aria’s snooping in her boyfriend’s past. Spencer’s stealing - from her family. And pure little Emily’s abstaining from abstinence.
The girls should be careful, though. They though they were safe when Ali’s killer was arrested and A’s true identity was finally revealed. But now there’s a new A in town turning up the heat. And this time Rosewood is going to burn.
Yay! 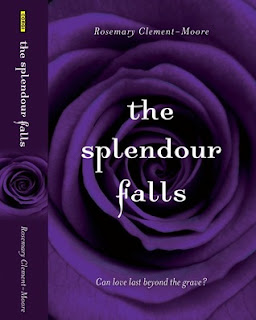 The Splendour Falls - Rosemary Clement-Moore (ARC)
The Splendour Falls has it all - a heroine that will steal your heart, a house that will haunt you and a love story that will leave you breathless.
Sylvie Davies is a ballerina who can’t dance. A broken leg ended her career, but what broke her heart was her father’s death, and what’s breaking her spirit is her mother’s remarriage.
Still reeling, Sylvie is shipped off to stay with relatives in the back of beyond. Or so she thinks, in fact she ends up in a town with her family’s history…and it turns out her family has a lot more history that Sylvie ever knew. More unnerving, though, are the two guys she can’t stop thinking about. Shawn Maddox, the resident golden boy, is the expected choice. But handsome and mysterious Rhys has a hold on her that she doesn’t quite understand.
Then Sylvie starts seeing things - a girl by the lake and a man with dark unseeing eyes peering in through the window…Sylvie’s lost nearly everything - is she starting to lose her mind as well?
A complete surprise from Random House. It was wrapped in black tissue paper with a velvety ribbon, an intriguing note and rose petals! Love it!
Hope everyone had a great week!
Sophie
Posted by So Many Books, So Little Time at 08:00
Email ThisBlogThis!Share to TwitterShare to FacebookShare to Pinterest