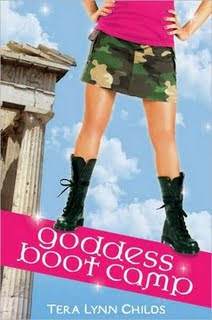 Other Titles by this Author: Oh.My.Gods. (my review)

Phoebe, who recently discovered she’s a descendent of Nike (the goddess, not the shoe), is finding out that supernatural powers come with a crazy learning curve.

A few months ago, when Phoebe’s mom married a Greek guy and moved her halfway around the world to the tiny island of Serfopoula, she had no idea that she’d soon find herself surrounded by the descendents of Greek gods, let alone that she’d learn her own heritage was more mythical that mortal. But because she still doesn’t quite have her new powers under control, something that can be dangerous since the gods are known for smoting those who use their powers recklessly, Phoebe’s been enrolled at Dynamotheos Development Camp, also known as Goddess Boot Camp, for the summer. What kind of earthly torture will Goddess Boot Camp be? Well, it can’t be any worse than Hades, can it?

This summer will be all about learning her powers, reigning them in, training for the marathon at the Pythian Games (the only athletic event bigger than the Olympics). And surviving Goddess Boot Camp with her love life and sanity intact!

Goddess Boot Camp is the hugely fun sequel to Oh.My.Gods.. I really enjoyed reading this.

Phoebe’s life gets a little more complicated in Goddess Boot Camp as she has some pretty serious things to deal with. She was desperate to learn more about her dad’s death, busy training for the Pythian Games - more important then the Olympics - and prepare for a test that will have dire consequences if she fails. And yet Goddess Boot Camp had me giggling throughout.

I really didn’t like Stella - Phoebe’s step-sister - in Oh.My.Gods., but she really began to grow on me while I was reading this. She’s actually a human being! Well, a very powerful, descendent of a goddess, human. We also learnt a lot more about Adara. I still don’t like her, though!

One of my favourite things about Goddess Boot Camp was the explanations of the twelve different powers at the beginning of each chapter and then seeing how Phoebe discovered them and then learnt to control them. It did make me realise that I need to brush up on my Greek mythology, though!