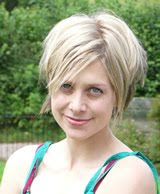 Lucy Christopher was born in Wales but grew up in Australia. Lucy moved back to the UK to do her degree and is now doing her PhD. Stolen is her first novel.
1. Is there a specific time or place that you do your best writing in?
I now have my own office to write in, which is absolutely lovely! I have a huge desk covered with lots of papers and a vase of carnations - just perfect! I tend to take quite a while to get into writing most days as I have a terrible tendency to faff about with writing emails and making coffee and procrastinating! So, I guess my best time to write would be the afternoon once I’ve got all my faffing out the way. I also really like to pen down ideas when I am on a long journey on a plane or a train!
2. Who were your favourite authors as a teenager? Are they different to your current favourites?
A lot of my favourite authors from when I was a teenager are the same as the ones I have now, funnily enough.
My family moved to Australia not long before I started high school. I was a really small Welsh kid and I didn’t fit in. So I took solace in the (air-conditioned) school library and in Mrs Adamson, our librarian. Mrs Adamson was a jolly roly-poly smiley lady and, perhaps because she felt sorry for me and could see that I didn’t fit in, she took pity on me and found me lots of books to read. And she chose really exciting books. Books that I had never read before in Wales, or even heard of. Books that were mostly about Australia. The best thing Mrs Adamson did for me was to introduce me to Australian teen fiction. I still love Australian teen fiction, with my particular favourites being John Marsden and Sonya Hartnett. When I was 13 and 14, I used to be pen pals with John Marsden and I thought he was the most amazing author in the world! Now, fifteen years later, he wrote the quote on the cover of the Australian edition of Stolen!
I have picked up a few new favourite authors along the way though. It was a happy day indeed when I discovered Tim Winton (another Aussie author, though writes for adults), and I also really love David Almond!
3. If you were only allowed to take three books to a desert island, what would they 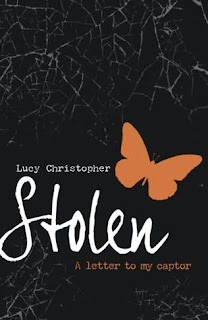 be?
Just three? Oh, too hard! Well, I’d have to take a really fat book of short stories that I can dip into when I have different mood swings on my island (preferably a collection with lots of Hemingway and Carver and Poe!) Then I think I’d like to take a field guide to all the flora and fauna on the island so that I can keep studying and learning while I was there. And thirdly, it would have to be a thick blank writing journal so that I can write my own novel there!
4. What inspired you to tell Gemma and Ty’s stories?
It started with the place. I wanted to write a story that was set in the outback, in Australia. It’s a much maligned landscape that’s got some seriously bad press over the years. It is also a landscape of extremes. I needed an extreme subject matter to echo the extreme landscape that I wanted to write about. I thought that kidnapping seemed like a pretty extreme subject matter to tackle. However, I knew that my kidnapper couldn’t be your regular stereotypical kind of kidnapper. He had a to a kidnapper, and a person, with conflicting aspects in his personality; a character of contrasts ... just like the landscape he had come from. Once I’d worked this out, then the characters of Ty and Gemma seemed to come pretty easily to me.
5. The Australian outback is such a harsh, but beautiful place. Why did you choose to set Stolen there?
Oh, for so many reasons! This landscape has fascinated me for such a long time now. I love this landscape: it’s beautiful and restorative and the most fertile desert environment in the world. I love the indigenous cultures that are entwined with it. But, like Gemma, I also find this landscape terrifying. And, like Gemma, it’s not a landscape I am overly familiar with (I grew up in a country town in Wales and then in a suburb of Melbourne). When I first saw the Australian outback, I thought it was open and hot and dangerous. I knew that if I got lost in it, I would die.
I’ve also long been fascinated by the way that this landscape has been portrayed in earlier Australian children’s literature, Australian art and in media reports. It’s been reported as a landscape where backpackers get murdered, dingoes steal babies and children get lost. It’s a horror landscape, and yet it is also a beautiful and spiritual landscape at the same time. I wanted readers to question their thoughts about a wild and isolated landscape; to think about whether it’s really as awful as they first assume.
This landscape of love and fear, beauty and terror, echoes perfectly the way Gemma feels for Ty. 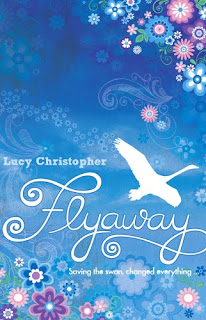 7. Kidnapping is such a controversial issue, and at first I was hesitant about reading Stolen. Were you ever worried that it may put people off?
A little! It was weird actually. As I started to write Stolen, all these kidnap cases came up! However, I kinda thought (hoped) it might work in my favour!
8. Are you working on anything at the moment? Can you tell us anything about it?
I have just delivered a book called Flyaway, which is totally different to Stolen. It’s about a girl called Isla and her relationship with a sick boy and a flightless swan. It’s happier than Stolen in a way, and I do hope the fans like it! Then after that book, I’m going to write another teen thriller!
Thank you very much, Lucy! You can visit Lucy on her website here and read my review of Stolen here.
Sophie
Posted by So Many Books, So Little Time at 09:00
Email ThisBlogThis!Share to TwitterShare to FacebookShare to Pinterest