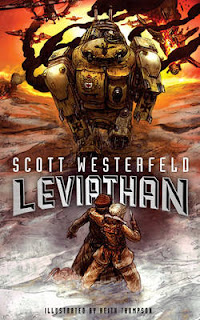 Leviathan - Scott Westerfeld
Pages: 434
Publisher: Simon and Schuster
Release Date: 6th October 2009
Other Titles by This Author: Uglies (my review), Pretties (my review), Specials (my review), Extras (my review), Parasite Positive (my review), The Last Days (my review), The Midnighters Trilogy
Two opposing forces on the brink of war.
The Clankers - who put their faith in machinery - and the Darwinists - who have begun evolving living creatures into tools.
Prince Aleksander, the would-be heir to the Austro-Hungarian throne, comes from a family of Clankers, and travels the country in a walker, a heavily-fortified tank on legs.
Deryn Sharp, a girl disguised as a boy, works for the British Empire, crewing an airship made of living animals, the ultimate flying machine.
Now, as Alek runs from his own people, and Deryn crash-lands in enemy territory, their lives are about to collide…
Leviathan was everything I’ve come to expect from Scott Westerfeld’s books: original, beautifully written and utterly fantastic.
The first thing that I have to mention about Leviathan is Keith Thompson’s illustrations. They are amazing - so much detail! They really enhance the story and fill your mind with the most incredible images of the Clanker machines and the Darwinist fabrications that I know will stay with me for a very long time. When I finished Leviathan, I even flicked back through the book taking in my favourite illustrations again.
Leviathan introduced me to a whole new genre. Steampunk. I had to look it up to see what it was when I first heard Leviathan being described as a steampunk novel! I don’t think that I could have been introduced to the genre by a better author. Leviathan was a fantastic mix of the past and future; blurring the lines of history, science and fantasy. Having studied WW1 I was reasonably familiar with the historical facts, but I didn’t expect the appearance of some of the figures that popped up in Leviathan or the way that Scott Westerfeld cleverly twisted history to fit his world.
Scott Westerfeld held a subtle grip on my attention throughout. The adrenaline-fuelled fights, the revealing of monstrous machines and creatures, and the secrets. I spent most of the second half of the novel waiting for Alek to discover Deryn’s secret, Deryn to discover Alek’s secret and both of them to find out just what Dr Barlow was up to. But not in an annoying way, in an ‘I-must-read’ way!
You can probably tell that I loved Leviathan and that I’m really looking forward to reading Behemoth next year, the second in the series. I’ve got a long time to wait, though!
Sophie
Posted by So Many Books, So Little Time at 09:00
Email ThisBlogThis!Share to TwitterShare to FacebookShare to Pinterest