The Dragon Book - edited by Jack Dunn and Gardner Zubois 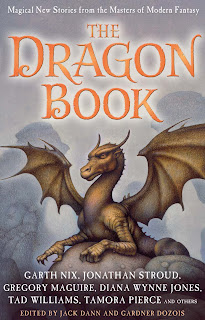 The Dragon Book - edited by Jack Dunn and Gardner Dozois
Pages: 433
Publisher: Anderson Press
Release Date: 5th November 2009
From Amazon: In this unmissable collection, the biggest names in Fantasy reignite the fire of these legendary beasts with stories that will consume your imagination. Magical! "The Dragon Book" has stories from Garth Nix, Tad Williams, Jonathan Stroud, Tamora Pierce, Diana Wynne Jones, Sean Williams, Greg Maguire and many others.
The Dragon Book is a collection of dragon stories from some of the best-known and most-loved modern fantasy authors.
Before reading this, the only dragons that I’d ever read about were the ones in Harry Potter and the Goblet of Fire so I was surprised at the variety of dragon lore that I encountered in the stories of The Dragon Book. Some breathed fire, some spoke, some were worm-like and some were household pests. I loved reading about the dragons that most contradicted my previous ideals about them. Some of my favourite stories were Vici by Naomi Novik, The Dragon of Direfell by Liz Williams, Oakland Dragon Blues by Peter S. Beagle and Puz_le by Gregory Maguire.
Each story was so different from the last, and for some of them I found it hard to engage with the story. It felt like it took me forever to read The Dragon Book and the constant change from Ancient Rome to modern California to a made up fantasy world made me have to force myself to read it at times. I think that The Dragon Book will be best appreciated by dipping in and out of the stories so that you can value each one for their awesomeness.
The Dragon Book is a brilliant collection of tales of magic and myth, a must for fans of dragons and fantasy.
Sophie
Posted by So Many Books, So Little Time at 09:00
Email ThisBlogThis!Share to TwitterShare to FacebookShare to Pinterest