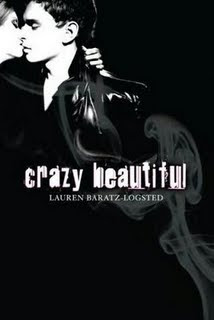 Crazy Beautiful - Lauren Baratz-Logsted
Pages: 193
Publisher: Houghton Mifflin
Release Date: 7th September 2009
Other Titles by this Author: The Sisters Eight series, Angels Choice, Secrets of My Suburban Life etc.
I would give a lot to see that smile again, directed at me. It may not be much, but I would give everything I’ve got.
In an explosion of his own making, Lucius blew his arms off. Now he has hooks. He chose hooks because they were cheaper. He chose hooks because he wouldn’t outgrow them so quickly. He chose hooks so that everyone would know he was different, so he would scare even himself.
Then he meets Aurora. The hooks don’t scare her. They don’t keep her away. In fact, they don’t make any difference at all to her.
But to Lucius, they mean everything. They remind him of the beast he is inside. Perhaps Aurora is his Beauty, destined to set his soul free from his suffering.
Or maybe she’s just a girl who needs love just like he does.
A modern retelling of Beauty and the Beast, Lauren Baratz-Logsted’s Crazy Beautiful strips away the original tale to get to it’s essence, revealing the truth about forgiveness, redemption, and the power of love.
Crazy Beautiful is a brilliant retelling of one of my favourite fairytales.
Aurora and Lucius were younger than I expected them to be. They were only fifteen whereas I assumed that they would be seventeen or eighteen. This gave Crazy Beautiful an innocence that lots of YA doesn’t have. It was a short, sweet story of first love perfect for younger teens.
When I began Crazy Beautiful I thought that Aurora was too perfect; beautiful, clever, kind and patient. And she was all of those things, but as more was revealed about her, I began to like her regardless. Lucius was by far my favourite character, though. He was just so interesting! His closed-off nature only intensified the mystery and intrigue surrounding him. But Lucius and Aurora together were the perfect fit; they complemented each other beautifully.
Other than the obvious, there weren’t many blatant similarities to Beauty and the Beast. the only ones that I can think of are Jessup, Crazy Beautiful’s version of Gaston, and the names Aurora Belle and Lucius Wolfe.
Crazy Beautiful is a quick, but beautifully written, book and I look forward to reading more of Lauren Baratz-Logsted’s books in the future.
Sophie
Posted by So Many Books, So Little Time at 09:00
Email ThisBlogThis!Share to TwitterShare to FacebookShare to Pinterest