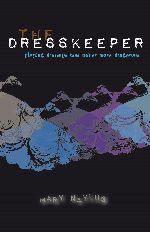 The Dresskeeper - Mary Naylus
Pages: 238
Publisher: Prospera Publishing
Release Date: 30th November 2009
Have you ever pretended to be someone else?
Picky Robson thought things couldn’t get any worse. Her life is a boy-free zone, she’s being bullied at school, then Mum announces she has to look after Gran every weekend for the foreseeable future. One night, unknowingly tempting fate, Picky slips into a flouncy old dress from the depths of an ancient chest and finds herself back in 17th Century London.
But she is not alone. A weirdo in a wig is trying to kill her - mistaking her for a girl called Amelia.
Who is Amelia? Can Picky change the past by exposing the murdered? And will she make it back alive?
The Dressmaker is an enchanting historical mystery sprinkled with magic. I thoroughly enjoyed it.
Picky was a lot younger than I expected her to be. I saw a lot of myself at thirteen in her actually: snappy, grumpy and fed up with homework! But it was when she annoyed me that I got worried! Her slip-ups in and reactions to 17th century society had me giggling to myself throughout.
The historical detail in The Dresskeeper is meticulous. All of the outfits were beautifully described and the sounds and smells of old London were brought back to life to the point where I could almost imagine myself riding in a Hackney carriage and picking up my court dress from my seamstress.
As well as all of the magical time-travelling, The Dresskeeper dealt with a modern teenagers worries such as bullies, self-image, broken families and money troubles. They were interweaved into the story subtly without making them the focus of the novel. A brilliant mix of fantasy and reality.
I thoroughly enjoyed The Dresskeeper and I’m looking forward to reading Mary Naylus’s second novel, The Plaguemaker, when it’s released next year.
Sophie
Posted by So Many Books, So Little Time at 09:00
Email ThisBlogThis!Share to TwitterShare to FacebookShare to Pinterest