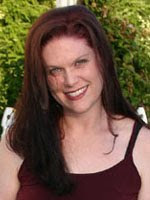 Lisa Mantchev grew up in Northern California but now lives in Washington with her husband, daughter and four dogs. Eyes Like Stars is her first novel.
1. Is there a specific time or place that you do your best writing in?
ANY time I have actual peace and quiet is a good time for writing! (Seriously, I have a little one and four dogs... it isn't often quiet at my house .) This usually ends up being very early in the morning or very late at night.
2. Who were your favourite authors as a teenager? Are they different to your current favourites?
As a teen, I loved the Shoes series by Noel Streatfield, the Sunfire historical romance novels, plus classics like Little Women and A Tree Grows in Brooklyn.
3. If you were only allowed to take three books to a desert island, what would they be?
I guess it would be cheating to take my iPod loaded up with audio books? I would probably take Outlander by Diana Gabaldon, Biting the Sun by Tanith Lee, and something by Terry Pratchett.
4. What inspired you to write a story set in a magical theatre? 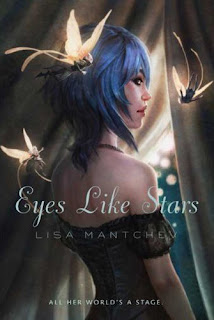 I started performing in musical theatre when I was seven, wrote and directed a play when I was in high school, then studied drama when I was in university. When I taught English (at a private elementary school) I also started the Drama After School Program. It was a pretty natural progression of "write what you know" for my first book
5. Which of your characters is your favourite? (Mine are the fairies!)
Depends on the day, honestly! I love writing the fairies' dialogue because it's my inner rude commentary on life, the universe, and everything. I have conversations with friends that end with "The fairies would so say something like that!"
6. Do you have a favourite play?
I have a LIST of favourites, but today I love Sweeney Todd because the music is so fabulous.
7. The cover of Eyes Like Stars is one of my all-time favourites. Did you have any say in the final image?
I didn't actually... Jason Chan produced that gorgeous artwork and there isn't a single thing about it that would change!
8. Are you working on anything at the moment? Can you tell us anything about it?
I just finished revisions on the second theatre book, PERCHANCE TO DREAM, as well as a yet-uncontracted Young Adult alt-history steampunk book. I'm also painting the garden fence and making my daughter's Halloween costume (with a glue gun) but that's probably less interesting.
Thank you very much, Lisa! You can visit Lisa on her website here and read my review of Eyes Like Stars here.
Sophie
Posted by So Many Books, So Little Time at 09:00
Email ThisBlogThis!Share to TwitterShare to FacebookShare to Pinterest