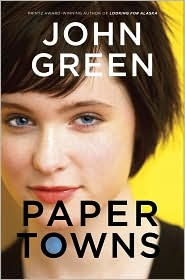 Paper Towns - John Green
Pages: 305
Publisher: Dutton Books
Release Date: 16th October 2008
Other Titles by this Author: Looking for Alaska, An Abundance of Katherines (my review)
Quentin Jacobsen has spent a lifetime loving the magnificently adventurous Margo Roth Spiegelman from afar. So when she cracks open a window and climbs back into his life - dressed like a ninja and summoning him for an ingenious campaign of revenge - he follows.
After their all-nighter ends and a new day breaks, Q arrives at school to discover that Margo, always an enigma, has now become a mystery. But Q soon learns that there are clues - and they’re for him. Urged down a disconnected path, the closer he gets, the less Q sees the girl he thought he knew.
Printz-medalist John Green returns with the brilliant wit and searing emotional honesty that have inspired a new generation of readers.
John Green’s third novel, Paper Towns, is just as clever, witty and funny as his previous two. I loved it.
It’s no secret that I love fantastical, mythical guys in my books, but the normal ones can be pretty cool too. Q, Ben and Radar are your average senior boys whom who see everyday and exchange smiles with, but rarely actually stop to talk to. All three guys were clever, funny, and had tendencies towards being rude and a little disgusting, though strangely endearing.
The other main character in Paper Towns, Margo, is a completely different story. An absolute mystery to Q, Ben, Radar and Lacey. I loved seeing where all the clues she left for Q took the four of them and lead to the next. Her pranks and schemes were ingenious. I wish I was that cool! Though being Margo would be pretty tough. She’s not at all who anyone thinks she is.
Paper Towns was incredibly deep and thoughtful, with a suitably complex plot. There were so many messages about life and people that I agreed with, it wasn’t all preachy, however. I know I’ve said this before; but Paper Towns is so cleverly written and constructed and I really did love reading it.
I can’t wait to read John Green’s collaboration with David Levithan, Will Grayson, Will Grayson, when it’s released next April.
Sophie
Posted by So Many Books, So Little Time at 09:00
Email ThisBlogThis!Share to TwitterShare to FacebookShare to Pinterest