This meme was started by the fabulous Kristi who was inspired by Alea. If you want more information check out their blogs. All summaries are from the book jackets.
My Dad went to the States last week and I asked him to get a few books for me. And he did! 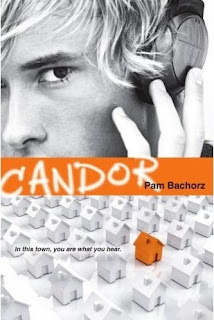 Candor - Pam Bachorz
Everything is perfect in the town of Candor, Florida.
Teens respect their elders, do their chores, and enjoy homework…because they’re controlled by subliminal messages.
Oscar Banks, the son of the town’s founder, is the model of perfection: class president, top student, shining example. But it’s only a disguise. Unlike all the other Candor teens, he knows about the Messages, and he fights them with his counter programming.
Only Oscar knows how to get kids out of Candor - for a price. Nobody suspects that he smuggles the richest new kids out of town before they change. It’s risky: if Oscar were caught, he’d be sent straight to the Listening Room, where the most resistant kids are wiped clean.
When Nia moves into town, Oscar is smitten by her tart attitude and ability to see through his perfect-boy front. He can’t stand to see her changed by the Messages. Now he must decide to help Nia escape Candor and lose her forever, or keep her close and risk exposure. 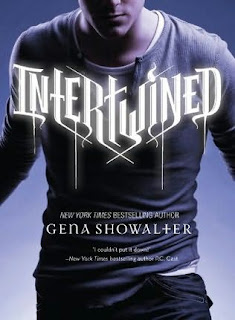 Intertwined - Gena Showalter
There’s something about the new guy at Crossroads High…
Most sixteen-year-olds have friends. Aden Stone has four human souls living inside him:
One can time travel.
One can raise the dead.
One can tell the future.
And one can possess another human.
With no other family and a life spent in and out of institutions, Aden and the souls have become friends. But now they’re causing him all kinds of trouble. Like, he’ll blink and suddenly he’s a younger Aden, reliving the past. One wrong move, and he’ll change the future. Or he’ll walk past a total stranger and know how and when she’d going to die.
He’s so over it. All he wants is peace.
And then he meets a girl who quiets the voices. Well, as long as he’s near her. Why? Mary Ann Gray is his total opposite. He’s a loner; she has friends. He doesn’t care what anyone thinks; she tries to make everyone happy. And while he attracts the paranormal, she repels it. For her sake, he should step away. But it’s too late…
Somehow they share an inexplicable bond of friendship. A bond about to be tested by a werewolf shape shifter who wants Mary Ann for his own, and a vampire princess Aden can’t resist. Two romances, both forbidden. Still, the four will enter a dark underworld of intrigue and danger - but not everyone will come out alive… 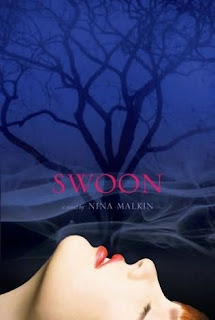 Swoon - Nina Malkin
Sin is coming…
Prepare to swoon.
Torn from her native New York City and dumped in the land of cookie-cutter preps, Candice is resigned to accept her posh, dull fate. Nothing ever happens in Swoon, Connecticut…until Dice’s perfect, privileged cousin Penelope nearly dies in a fall from an old tree and her spirit intertwines with that of a ghost. His name? Sinclair Youngblood Powers. His mission? Revenge. While Pen is oblivious to the possession, Dice is all too aware of Sin. She’s intensely drawn to him - but not at all crazy about the havoc he’s wreaking.
Determined to exorcise the demon, Dice accidentally sets Sin loose, gives him flesh, makes him formidable. Now she must destroy an even more potent - and irresistible - adversary before the whole town succumbs to Sin’s will. Only trouble is, she’s in love with him.
What do you do when the boy of your dreams is too bad to be true?
I’m so am so unbelievably excited to read all three of these! I’ve been waiting to read them for a long time.
Sophie
Posted by So Many Books, So Little Time at 08:00
Email ThisBlogThis!Share to TwitterShare to FacebookShare to Pinterest