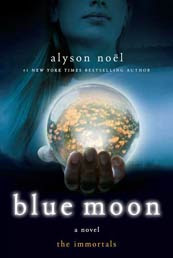 Blue Moon: The Immortals - Alyson Noël
Pages: 284
Publisher: St. Martin’s Griffin
Release Date: 7th July 2009
Other Titles in the Series: Evermore (my review), Shadowland (17/11/09)
Just as Ever is learning everything she can about her new abilities as an immortal, initiated into the dark, seductive world by her beloved Damen, something terrible is happening to him. As Ever’s powers increase, Damen’s begin to fade after he is stricken by a mysterious illness that threatens his memory, his identity, his life.
Desperate to save him, Ever travels to the mystical dimension of Summerland, where she uncovers not only the secrets of Damen’s past - the brutal, tortured history he hoped to keep hidden - but also an ancient text revealing the workings of time. With the approaching blue moon heralding her only window for travel, Ever is forced to decide between turning back the clock and saving her family from the accident that claimed them - or staying in the present and saving Damen, who grows weaker by the day…
Blue Moon is the explosive sequel to Evermore. I loved it, much more than I did Evermore.
Ever’s developing psychic powers were really explored in Blue Moon. I was completely absorbed by her powers and I was eager to know what she could do with them. I also kept wondering what it would be like to have them myself…
We also saw a lot more of Summerland this time. A magical realm that holds a lot more than it first seems. I love that you can manifest anything, including people; I could have hours of fun with that! But as I learned more about Summerland I began to feel that it had quite a few similarities to the Realms of Libba Bray’s Gemma Doyle trilogy.
I think that one of the reasons that I liked Blue Moon a lot more than Evermore was the utterly unpredictable plot. My mouth was often left gaping in shock and I even gasped a once or twice. I didn’t even bother guessing what would happen next; I knew I’d get it wrong anyway! There was also a new character introduced in Blue Moon, and I didn’t like him one little bit. I think he’ll be popping up in Shadowland quite a lot, though.
I loved Blue Moon and after it’s ending, I can’t wait for Shadowland.

Sophie
Posted by So Many Books, So Little Time at 14:34
Email ThisBlogThis!Share to TwitterShare to FacebookShare to Pinterest