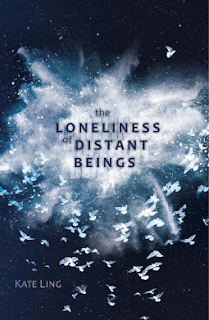 It is that quick, that strong, that beautiful. And it is also totally impossible.

Even though she knows it’s impossible, Seren longs to have the sunshine on her skin. It’s something she feels she needs to stay sane. But when you’re hurtling through space at thousands of kilometres an hour, sometimes you have to accept there are things you cannot change.

Except that the arrival of Dom in her life changes everything in ways she can barely comprehend. He becomes the sun for her, and she can't help but stay in his orbit. To lose him would be like losing herself.

In the dark, can a heart still hope?

I’ve been dying to read Kate Ling’s debut ever since I heard about it, and while I enjoyed it, The Loneliness of Distant Beings didn’t quite live up to my expectations.

Reading The Long Way to a Small, Angry Planet last year rebooted my eagerness to get into sci-fi and it's set my expectations for all the whole genre through the roof. And The Loneliness of Distant Beings didn’t meet them. I was hoping for a romantic, clever and fun space opera, and while it was all of those, it was also melodramatic and I found myself rolling my eyes constantly. This book features some of the worst instalove I've read in a very, very long time.

Seren and Dom were making sweeping declarations and risky decisions in the name of love only days after meeting. It's all very dramatic and I just couldn’t buy into it – therenwas no grounding for their feelings other than physical attraction and they blatantly ignored the harsh repercussions of their relationship.

Seren lives aboard Ventura. She’s never seen land and she never will because she’s part of a 700-year round trip mission to trace the origin of a mysterious signal found on Earth. And they’ve only been travelling for 84 years. To ensure the ship makes it to Epsilon, everything is rigidly controlled: education, duties and work roles, marriage and breeding. Seren is chaffing against the restraints and Dom is the final straw.

I really liked the set up of Seren’s world. I loved how bleak and inevitable everything seemed, even as she and Dom fought against the people in charge. Is it weird to say that I was actually hoping for the ending that felt inevitable – the failure to overcome such a powerful system? It would have been bleak af, but it would have been realistic and instead we got a happy ever after, albeit a tricky one to attain. It was like the tone of the middle section set one thing up, then someone thought ‘Nope, this needs a HEA!’ and everything sharply changed direction. It just felt a little disjointed. I do have to admit that the very end was super intriguing and I'd definitely be interested in seeing what happens to these characters next. There’s such a lot of possibility in the position we left Seren.

The Loneliness of Distant Beings is a fun and easy read, but I was disappointed by the intense instalove and disjointed tone.

Thanks to Little Brown for the review copy.