#2016ClassicsChallenge: Daisy Miller and The Turn of the Screw 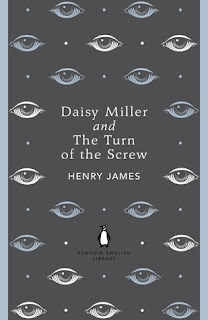 WHEN I Discovered This Classic
I don’t remember not knowing about this classic, but it was only recently (in the last few months) that I realised it was two novellas rather than one novel…

WHY I Chose to Read It
The Turn of the Screw was the Audible Daily Deal a few weeks ago and so I snapped it up. It’s a very short audiobook and there’s nothing like a short audiobook to get me to finally read something I've been meaning to for ages! So I decided to just go for it, and I might as well read Daisy Miller while I’m at it – it’s even shorter!

WHAT Makes It a Classic
I’m honestly not sure.

WHAT I Thought of This Classic

Daisy Miller
Daisy Miller is a short story, coming in at only around 65 pages, and I devoured it in about an hour. It tells the story of an American man, Winterbourne, who meets New Yorker Daisy in Italy as she travels around Europe with her mother and younger brother.

It soon becomes clear that Daisy’s flirting with Winterbourne was a sport rather than the serious nature which that kind of affection would be taken for in the 1850s. She's precocious and flighty, breaking the rules of society and polite conduct with ease and no one to stop her. Henry James brings in some really interesting discussions about how societal rules and conventions differ between Europe and America, and I think he was more on the side of Europe.

This clear intention became really obvious with the ending of the story. I'm about to discuss spoilers so if you want to steer clear, skip to the next paragraph! Okay. The story took a didactic turn with Daisy’s behaviour becoming more and more unacceptable by the members of English and European society that they were among in Rome. When ignoring common knowledge to not walk around the city after dusk, she visited the Colosseum and subsequently contracted malaria and died from it. It didn’t quite sit well with me, but I could also see how it would have made Daisy Miller a significant story young women would have been made to read in the tight-laced Victorian era.

I'd heard a lot about how difficult James is to read: his sentences are long and overwrought and his points rambling and hard to grasp, but I actually found it easy to follow and become absorbed by Daisy Miller. I actually much preferred the directness of the narration to how it was done in The Turn of the Screw.

The Turn of the Screw
The narrative set-up is convoluted in a way I'm coming to expect from mid-19th century novels. A nameless narrator is listening to his friend, Douglas, read an account of a former governess of her experiences at Bly, looking after a boy and a girl who are in the custody of an uninterested uncle. I find this style a bit tiresome and unnecessary, but I reckon it was probably an early version of split or dual narration?

I was glad when we got into the governess’s story. I actually listened to the audiobook read by Emma Thompson and I think that was the only reason I continued reading it. She really is quite an actor. I basically want every audiobook I listen to for the rest of time to be narrated by her – that’s possible right? I loved how everything became more and more taught and intense as the story went, but I wasn’t hugely interested.

The ghosts haunting Bly never felt particularly sinister and I wasn’t creeped out at all. I was just a little underwhelmed, really.

WILL It Stay a Classic
Probably, though I don’t think it’ll stick with me. The Turn of the Screw is thought by many people as the first ghost story!

WHO I’d Recommend it To
- People intimidated by full-length classic novels.
- Fans of Gothic short stories and explorations of the differences between the Europe and US during the Victorian era.