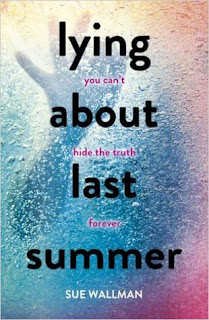 Last summer Skye’s sister died in a tragic accident. Now she's looking for an escape from reality. Her parents think that a holiday camp for bereaved teens might help her move on.

At first camp doesn’t seem so bad. But when Skye starts receiving texts from someone claiming to be her dead sister, she fears the past is about to surface…

Lying About Last Summer is a quick, easy to read debut about grief, friendship and moving on.

Skye’s story jumps between her week at Morely Hill, a bereavement activity camp for teenagers, and last summer when her sister died. The comparisons between the two summers were really interesting, especially when it allowed me to see how Skye and her life has changed. But I did find that sometimes younger Skye felt much younger in the flashbacks than she should a year before her in the present day. She occasionally seemed as if she were only about 12 or 13 when I'm assuming she was 14/15.

But as the story moved forward and Skye started to receive messages from someone pretending to be her sister, the tension really amped up. I read the second half way more quickly that I did the first! Skye became paranoid of everyone at Morely, wondering if they could be responsible and attempting to eliminate them. I definitely had my suspicions, but I was wrong and I love that! The way it played out was completely unexpected and led to much bigger drama alongside than I wasn’t anticipating. It was full throttle and intense and I couldn’t turn the pages fast enough.

Sue Wallman’s debut is tense and wonderfully paced and I'm looking forward to see what she's got coming next.