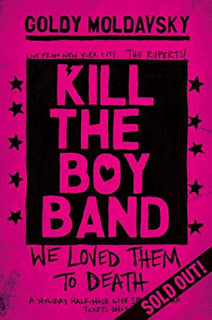 Okay, so just know that that it wasn’t supposed to go like this. All we wanted was to get near The Ruperts, our favourite boy band.

We didn’t mean to kidnap one of the guys. It kind of, sort of, happened that way. Now he's tied up in our hotel room. And the worst part of all, it’s Rupert P. All four members of The Ruperts might have the same first name, but they couldn’t be more different. And Rupert P. is the biggest flop out of the whole group.

We didn’t mean to hold hostage a member of The Ruperts, I swear. At least, I didn’t. We are fans. Okay, superfans who spend all of our free time tweeting about the boys and updating our fan tumblrs. But so what, that’s what you do when you love a group so much it hurts.

How did it get this far? Who knows. I mean midterms are coming up. I really do not have time to go to hell.

This book is completely nuts, and while I was a bit hesitant about going into it, I ended up really enjoying it!

Within pages it became glaringly obvious that The Ruperts are basically One Direction. How they came about, the different personalities of the boys and their roles in the group and the unprecedented fan reaction. I mean, I'm a fangirl for lots of things, just not boybands any more, but that didn’t stop me from completely understanding where the girls were coming from. I loved the way that being a fangirl was celebrated, even if the fangirls in questions are psychotic… Young girls are often denied their voice and have the things they like dismissed so it was cool to hear from that point of view. And yet at the same time, Kill the Boy Band also mocks fangirls a hell of a lot. These girls are mental and that is really drawn on to show the dark side of fandom. It’s an interesting position and I really can't tell Goldy Moldavsky’s opinion on it.

One of my favourite elements of the novel was the humanising of The Ruperts. Most of the boys are actually assholes and it was really interesting to see the girls turn from blind love to that knowledge that they're actually people, and not very nice people at that. Meeting your heroes can be so underwhelming and it's soul destroying if you learn something bad about them and this level of fandom doesn’t let you keep your distance! It was an interesting dynamic and it made me wonder just how many people had somehow got to know someone famous and upon discovering that they were just a person was incredibly disappointed.

While reading and upon finishing Kill the Boy Band I was just in that finishing-an-enjoyable-book haze, but as I thought about it more and make some final review notes, some things really jumped out at me and wouldn’t let go. This is a small spoiler here so look away if you haven’t read it yet! When Apple kidnaps Rupert P, she does so by knocking into him and knocking him out. Her size knocks out a grown man. It's explicitly stated that she weighs 267 pounds in the novel and she is constantly called fat by the narrator. She has very little else to define her other than her size. It’s used to turn her into the joke of the group and it made me feel sicker the longer I thought about it. I mean, how bloody damaging is that! You’re reading a book and you find out that a character who is the same weight or lighter than you is constantly being ridiculed for being fat. That’s just plain damaging and it was irresponsible of Moldavsky to write that into her book, especially one targeted at young, impressionable girls.

But the issues with Apple don’t stop there. Rupert L is Apple’s favourite and while he’s in their room and tied to a chair, he is basically sexually assaulted by her. She's always touching him and licking him (!) even after he expresses distress and tells her to stop. It's never even touched upon that it might be wrong because it's funny. He’s the ‘ugly one’ and Apple is the fat one. The narrator even says at one point that she thinks Apple only likes Rupert L because she knows that none of the other (prettier) boys would ever stoop to her level. It’s vile. It's just vile.

I really enjoyed Kill the Boy Band while I was reading it. It's a fun, fresh and original tale about friendship, fandom and obsession, but I just can't condone the horrific fat shaming that takes place in this book.