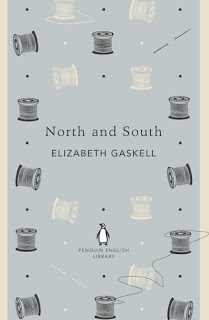 Originally published in 1855 by Chapman and Hall. Initially serialised in ‘Household Worlds’ between 1854-5.

WHEN I Discovered This Classic
I don’t really remember not knowing about North and South. My mum was a big Gaskell fan and it was a book she re-read every few years, but I didn’t really take much notice of it until I started to watch lots of booktubers who focus more on classics. They gushed about it and the Richard Armitage adaptation – I was sold!

WHY I Chose to Read It
I read Gaskell’s Cranford last year completely on a whim and I really enjoyed it. I knew I wanted to read more of her work so I figured I'd go for her most famous novel next! Plus, I really want to watch the adaptation, but of course I need to read it first!

WHAT Makes It a Classic
Gaskell was a contemporary of the Brontës and a successor of Austen and has elements of both. In fact, she was a great friend of Charlotte Brontë and even wrote the first biography of her.

WHAT I Thought of This Classic
Unlike with Cranford it took me a while to warm to North and South. This is the first classic novel I've come across that is set in the industrial north and while it was fascinating and I love how different it made everything feel, I did think Gaskell got a little bogged down in the politics and explanations of mills, the strikes and the discontent between the owners and the workers. I found myself skimming these parts and hoping there wouldn’t be another for a good while, but these scenes were rather frequent. Though I never came to like them, I did end up being able to look past them and enjoy the story anyway.

I did enjoy the northern setting, however, especially the contrast between Margaret’s life in the south and her new home in Milton. Society has no function in Milton: it won’t achieve a successful marriage, no one has the time for society as everyone works and society doesn’t feed anyone or make anyone money. It was cool to see this side of life in the mid-1800s, especially the harshness of life for the lower closes. The dirt, the illnesses, the smoke and fog and weariness of the north show on the characters and it really was startling when comparing them to the upper class characters of lots of other Victorian novels, all set in the south or in the respectable parts of London.

Mr Thornton is a mill owner who has worked himself up from poverty to prosperity and when he becomes involved with the Hales and is the student of Margaret’s father a Pride and Prejudice-eque courtship begins between him and Margaret. I couldn’t believe the parallels between the two! Not so much in other elements of the novel, but in the way they interact, the misunderstandings and the course of their romance. There are also characters that resemble Mr Collins, Mr Wickham and Margaret’s parents are rather reminiscent of Mr and Mrs Bennet, however. That was a lot of fun.

I have to admit that I was totally cheering Margaret and Mr Thornton on. As we got towards the end of the novel and nothing had been resolved between them I genuinely started muttering to the cat about how worried I was that they wouldn’t end up together (she didn’t care), but all was well. I was surprised at how much I'd fallen for these characters without even realising it. I ended up ordering two more of Gaskell’s novels – Wives and Daughters and Mary Barton – very soon after finishing North and South!

WILL It Stay a Classic
Gaskell’s connection with Charlotte won't be forgotten quickly, and nor will her explorations of the industrialisation of the North of England – North and South is said to be one of the first!

WHO I’d Recommend it To
- Fans of Pride and Prejudice!
- People interested in seeing a different side of Victorian England.
- Those interested in the industrialisation of northern England.

Fun Fact
- ‘Household Words’ which North and South was originally serialised in was owned and run by Charles Dickens. He edited North and South and recommended the title over Gaskell’s choice of Margaret Hale.