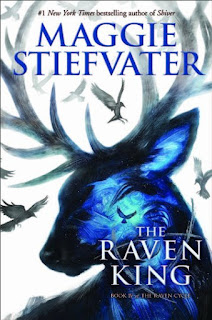 SPOILER WARNING! THERE WILL BE SPOILERS FOR ALL FOUR BOOKS, INCLUDING ‘THE RAVEN KING’, IN THIS REVIEW.

It feels like I waited forever for ‘The Raven King’. I had to have a re-read of the first three books so I could savour the final instalment in all its glory.

I can honestly say that I've never gone into a book feeling so damn scared for a group of characters. There were so many books that I had to put the book down and walk away for half an hour just to collect myself; I even felt a bit sick when I noticed that Gansey was wearing an Aglionby jumper and it was getting wet from the rain… It was kinda traumatic, actually. Part of me just didn’t want to read it because I didn’t want to know!

But guess what I 100% did want to know about? Blue and Gansey! I really am all in with them and I was so pleased when they finally revealed to Adam and Ronan that they were together. It was sweet and awkward and lovely. And that almost kiss at the toga party completely took my breath away – that kind of delicious, romantic tension is something that Maggie Stiefvater really does beautifully. I would have liked to have seen a bit more of it if I'm honest.

It's here! Thank you @scholastic_uk! I was pacing myself with my series re-read, but now? Full steam ahead!
A photo posted by Sophie (@solittletimeforbooks) on Apr 21, 2016 at 4:37am PDT

There was some with Adam and Ronan to a degree, but I have mixed feelings about their relationship. Up until ‘The Raven King’, I had only ever seen Adam as appreciating Ronan having a crush on him – he liked to feel loved and wanted and searched for Ronan’s approval, but I’d never gotten vibes of him actually returning his feelings. And I still didn’t until they kissed and then Adam was all confused about whether he felt anything for Ronan or not. That was never resolved or even really discussed again until the epilogue and Adam was driving Ronan’s BMW and his parents mentioned his ‘boyfriend’. Did I miss something? Although I love them together, I really do, I couldn’t help but wonder if that was a pandering to the fans.

The ending of the novel was just as heart-wrenching as I expected and I really liked the way that everything was worked out. Well, relief is a more accurate feeling than like… But I did feel a little underwhelmed by the epilogue. I was still left with lots questions: Can Blue and Gansey kiss now? Is the curse fulfilled, or is it a lifetime thing? Did Adam decide if he actually has feelings for Ronan? Did Noah pass over? It felt rather like it was all being left open for more, and while I'm completely up for that, I was expecting a bit more oomph from an ending to such a glorious series, and a book we waited 18 months for.