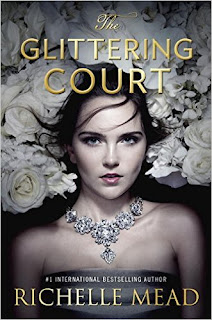 For a select group of girls, the Glittering Court offers a shot at a life they’ve only ever dreamed of, one of luxury, glamour, and leisure.

To high-born Adelaide, whose wealthy family is forcing her into a loveless marriage, the Glittering Court represents something else: the chance to chart her own destiny, and adventure in an unspoiled, prosperous new land across the sea.

After a chance meeting with the dazzling Cedric Thorn, Adelaide poses as a servant to join the crop of impoverished girls he promises to transform into proper ladies. But her familiarity with upper class life comes with a price: she must hide her identity from her new friends, mysterious refugee Mira and fiery former laundress Tamsin, and most importantly, from Cedric himself even though she’s falling in love with him.

Everything begins to crumble when Cedric discovers Adelaide’s ruse, and she catches the eye of a powerful young governor, who wants her for a wife. She didn’t leave the gilded cage of her old life behind just to become someone else's property.

But nothing is as daunting or as wonderful as the potent, forbidden attraction simmering between Adelaide and Cedric. One that, if acted on, would make them both outcasts in a wild, dangerous, uncharted world, and possibly lead them to their deaths.

After Richelle Mead’s disappointing last novel, Soundless, I was a bit hesitant about going into The Glittering Court, and while it didn’t blow me away, I did enjoy it.

I went into this book completely blind, knowing nothing other than that it was the first in a fantasy companion trilogy, so I was quite surprised to see how similar the premise was to Kiera Cass’s The Selection series. It contained lots of the same themes and ideas: lower class women intent on ensnaring a rich husband, gowns and high society and girls grating against the confines of their positions, but it also delved into the role of women in this world, the prejudices against refugees and native people and the fear of new religions.

The role of women in the Glittering Court and the wider world of this novel was really interesting, but I don’t think it was explored as well as it could have been. The Glittering Court could have been a real feminist punch, but it didn’t quite stretch past some of the girls vaguely whinging about the treatment and expectations of women. It does highlight the inequality between men and women though, especially when it came to the lower classes, in a really powerful way towards the end. I feel like the real feminism will come from Mira’s story – there’s so much to her character and I can't wait to hear her story. While I didn’t mind Adelaide, I didn’t ever truly connect with her as much as I wanted to. She has strength and sass, but not a whole lot of substance or history – she was really rather blah, unfortunately – my hopes are pinned on Tamsin and Mira.

In the last 100 pages of the novel, Adelaide finally started to have some grit and I enjoyed that last quarter more than I’d enjoyed the previous 300 pages! It wasn’t until then that The Glittering Court started to feel a little bit more like a fantasy novel. There are no magical/mystical elements whatsoever in the novel, it’s just set in a fictional world, so that sense of adventure, a tendency for things to go horribly wrong and lives being risked left, right and centre made me race through the ending. While Adelaide’s story was wrapped up fairly neatly, there was enough left dangling to make me curious about the next two books in the series.

The Glittering Court is an interesting and enjoyable start to a new series from Richelle Mead, but I’m still holding out for that spark that has made the Vampire Academy and Bloodlines series’ among my very favourites.