The Girl of Ink and Stars, Kiran Millwood Hargrave 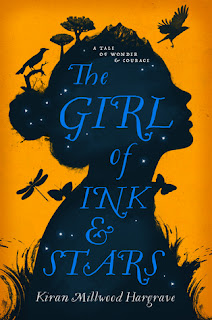 Forbidden to leave her village on Joya’s coast, Isabella dreams of the unmapped heart of her island. When her closest friend disappears beyond the village walls, she’s determined to lead the search party. Guided by an unfinished map, a beloved myth and her knowledge of the stars, Isabella navigates the dangerous Forgotten Territories. But beneath the dry rivers and smoking mountains, a fiery legend is stirring from its sleep…

I've heard nothing but praise for The Girl of Ink and Stars and I was so excited to get my teeth into it that I saved for an afternoon where I could read it all in one sitting. I did, and it was delicious.

Within pages of starting this beautifully written debut I was completely immersed in Isabella’s world. Joya is rich in myth, magic and legend and I almost felt like I was racing through the hot, dusty market town right along with Isabella. The setting was just how I like it: vivid, rich and tangible. I also love it when the setting of the story almost becomes a character in the novel and that definitely happened in The Girl of Ink and Stars. Everything was revealed wonderfully slowly, just drips and drops to tantalise us, and the way it unfurled was beyond what I had imagined for it. Pure magic.

And the maps! Oh, the maps! Isabella’s da is a cartographer and he’s been teaching Isabella to create them. Most of Joya has been sectioned off and marked as forbidden for all of Isabella’s life. Her own island is unmapped and she’s determined to change that. Da’s maps are beautiful and almost alive, and the ones featured in the proof (which is the most gorgeously produced proof I've ever had the pleasure of reading, btw) were just as lovely. I want book maps all over my walls, please.

I love it when friendship becomes a primary focus of the story and I loved the evolution of Isabella’s relationship with Lupe. The clash of the poor girl and the governor’s daughter comes to a head very quickly, but I enjoyed watching them both realise the fault lay with neither of them and they ended up on the most wonderful adventure together. Younger friendships aren’t always portrayed as strong or as long-lasting as those in YA, but The Girl of Ink and Stars proved that wrong. There were a few moments towards the end that they both brought tears to my eyes.

The Girl of Ink and Stars is a gorgeously written debut that’s bursting with adventure and friendship, myth and magic. I can't wait to read more from Kiran Millwood Hargrave.

Thanks to Chicken House for the review copy.