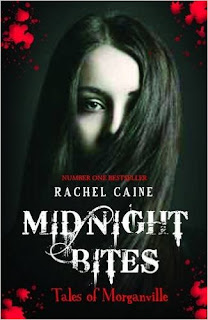 Synopsis
Bringing together everything Rachel Caine has written in short form about Morganville, this collection is carefully organised into a timeline so you can read from the earliest adventures – some of which belong to vampires – all the way through to post-Daylighters, the final novel in the series. Midnight Bites includes more than 50,000 words of brand-new content, alongside stories compiled from the author’s website and anthologies.

Including ‘Dead Man Stalking’ and ‘Pitch-Black Blues’, these tales feature everyone’s favourite bunny-slipper-wearing mad scientist, a fatal car crash, zombies, eerie carnival grounds, a blood-dispensing vending machine and much more. This diverse and supercharged group of stories will shine a little more light into the murkiest corners of Morganville.

Mini-Review
Midnight Bites was a sheer delight to read; Morganville is like coming home.

This collection spans 22 stories. From Myrnin hundreds of years before the founding of Morganville to a few months after the end of Daylighters. It was awesome to catch up with Claire, Shane, Michael, Eve and the rest of the gang, as well as see glimpses of them between books and before. I especially loved Myrnin’s stories and delving into Eve’s background and her early crush on Michael.

I had actually read some of the stories before in various anthologies and as extras in the books, but I still loved reading them again. Some of the longer stories even felt like I was in the middle of a novel and I was sad every time a story ended. But it was super cool to read an intro from Rachel to each story explaining the origins and backstory of each story – it’s always a treat to get a glimpse into an author’s process. 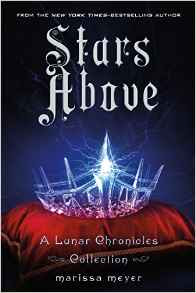 Synopsis
The universe of the Lunar Chronicles hold stories – and secrets – that are wondrous, vicious, and romantic. How did Cinder first arrive in New Beijing? How did the brooding soldier Wolf turn transform from young man to killer? When did Princess Winter and the palace guard Jacin realise their destinies? With nine stories – five of which have never before been published – and an exclusive never-seen-before excerpt from Marissa Meyer’s upcoming novel, Heartless, about the Queen of Hearts from Alice in Wonderland, Stars Above is essential for fans of the bestselling and beloved Lunar Chronicles.

Mini-Review
The feeling of being back in this world alone was worth the price of this book and much more. Pure joy!

It was interesting to see Cinder, Wolf, Winter and Jacin before we met them and to properly meet Scarlet’s grandmother, Michelle Benoit, and see Cinder’s journey to the farm and then to New Beijing. And, of course, the final story which was a sort of epilogue that went past the end of Winter and starred a wedding. That story was hands down my favourite and I even got a little weepy with all of the romance and sweetness and pure cute of it!

After ‘Something Old, Something New’, my other favourite was ‘The Mechanic’, a story not relating to any of the characters we’ve come to know and love. It’s a short, sweet tale of a mech android who is working on a luxury space ship and starts to develop human emotions for the designer of the ship. It was really cool to see more of the world and it was just a beautiful little story. I want more from this world!

Stars Above is a must-read for fans of the Lunar Chronicles and those pining for more of the gang after Winter. And now I’m off to find Fairest…