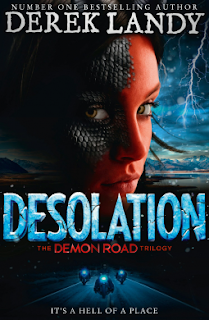 Other titles by this Author: Skulduggery Pleasant series, Demon Road

Reeling from their bloody encounter in New York City at the end of Demon Road, Amber and Milo flee north. On their trail are the Hounds of Hell – five demonic bikers who will stop at nothing to drag their quarries back to their unholy master.

Amber and Milo’s only hope lies with Desolation Hill – a small town with a big secret; a town with a darkness to it, where evil seeps through the very floorboards. Until, on one night very year, it spills over onto the streets and all hell breaks loose.

And that night is coming…

Demon Road was one of my big surprises of last year so I was super excited to get stuck into Desolation. Though I enjoyed it, it didn’t quite blow me away like Demon Road did.

Desolation Hill is creepy. And I mean creepy. The secrets, the inclusiveness, the hatred for outsiders – everything rings alarm bells for Amber and Milo, but they don’t have a choice if they want to outrun the Hounds. I almost wondered if there was a Lottery-style situation going on and I immediately hated most of the residents of the town. But we also got a few POVs that seemed a little random and not tied to Amber and Milo’s adventure at all, though they were in Desolation Hill as well. I actually became really fond of Javier and Virgil and then Kelly, Linda, Warrick, Ronnie and Two who are essentially the Scooby Doo gang. I loved seeing them make their way into the main story and interact with Amber and Milo.

And that’s lots of why I enjoyed it, but thinking over what jarred me about Desolation is making me want to go back and knock it down a star. Amber’s appearance is constantly discussed and thought about both by herself and the other characters. It was established in Demon Road that Amber as a human is very normal; she’s fairly plain and a little chubby, but as a demon, she’s breathtakingly beautiful. Amber as a human is constantly called ugly, people openly say that they prefer her as a demon and she consistently berates herself for her appearance. And then Kelly enters the picture and she’s objectified by most characters she meets and her sexuality (she’s a lesbian) is equated with her slim, tattooed, red-haired appearance. That was the sum of her personality. I honestly couldn’t tell you what she was like outside of that at all, and this book is nearly 500 pages long.

Though I still enjoyed Desolation, it lacked that certain something that made Demon Road so completely enjoyable and fun. I will still be reading book three and hoping that Desolation was just a case of second book syndrome.

Thanks to NetGalley and Harper Collins for the review copy.