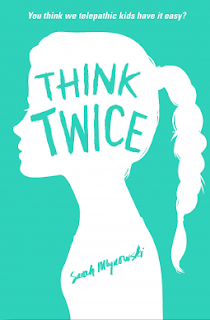 Other Titles by this Author: Magic in Manhattan series, Whatever After series, How to Be Bad, Gimme a Call, Ten Things We Shouldn’t Have Done, Don’t Even Think About It

The Espies are back in the smart and funny follow-up to Don’t Even Think About It by Sarah Mlynowski.

When class 10B got their flu shots and developed the unexpected side effect of telepathy, it seemed like the worse thing ever. But two years later, they’ve got used to their powers. They’ve even come to like them. And as they prepare to leave school, they’re all making exciting plans – plans that involve them being Espies.

So when one by one they suddenly being to lose their powers, they know they can’t let it happen. Can they save their telepathy before it’s too late? Or will they have to learn to survive without them once again?

I really loved reading Don’t Even Think About It a few years back so it was super exciting when Think Twice popped up on my Twitter feed – I didn’t even know it existed! Sadly, I didn’t enjoy it as much as book one.

Think Twice picks up two and a half years after the Espies got a contaminated flu shot and developed ESP. Now they’re comfortable with their power and used to the ups and downs of them, and one by one, the Espies are starting to lose their powers. It was really interesting to see them all start to panic and doubt the futures that they had planned revolving around their ESP and using the perks that come with it. And then even more confusion and panic that ensued as they experimented with saving their abilities. I loved seeing the fall out of their lives change again and the relationships that were fractured by the change in the balance between them.

Yet I just didn’t fully connect with it. Think Twice is written in close up third and keeps up with most of the Espies, but it was so unclear who was speaking or thinking most of the time. I had to keep reading back a paragraph or two to try and figure it out, and then I mostly had to guess. It didn’t get clearer either. Other than that, Think Twice is a quick, easy and fun read and while it was fun to be back with the Espies, it wasn’t as good as book one.

Thanks to NetGalley and Orchard for the review copy.