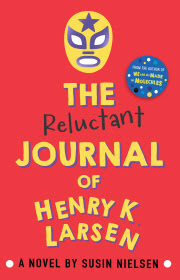 Other Titles by this Author: We Are All Made of Molecules

Now he's moved with his dad to a new city, where nobody knows their name. Living off a diet of pizza, hiding from the nosy neighbours, Henry just wants to stay under the radar and keep his family’s secret.

I loved We Are All Made of Molecules when I read it last year so I got super excited when The Reluctant Journal of Henry K Larsen dropped through my letterbox. I loved it just as much!

When Henry starts his journal on the recommendation of his psychologist after IT happened 7 ½ months ago. IT caused his family to split up, Henry and his dad to move to another city and his life to turn upside down. Henry mentioned little snippets related to what happened and I did make a few guesses, but really happened really blew me away. The truth was sadder, more shocking than I could have imagined. I won't spoil anything, but just so I can try to review this book, I will say that it had something to do with severe bullying.

The bullying was intense and scary and I ached for the characters that I fell in love with so quickly. Henry is a little overweight, what he calls his wobblies, and he’s a complete nerd and so he’s desperate to start a fresh at his new school. As things tend to do, the secret comes to a head and Henry reveals everything in his journal and eventually to his two new best friends. It was heart-breaking.

The changed relationship that was left between Henry and his mum was definitely one of the most powerful aspects of the novel. Though she had to come to terms with what had happened, it felt a little like Henry was being punished for it and it made my heart ache for him. It was nice to see the unexpected places that Henry found solace and comfort and advice in, though, particularly Karen from his new apartment building.

Susin Neilsen writes the most beautifully sweet and sad novels about family, friendship and loss and I'm eagerly awaiting whatever she releases next.