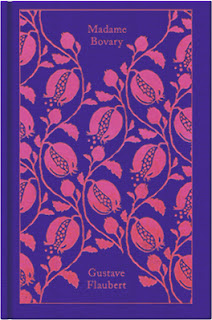 My edition: You’ve probably guessed it, the Penguin Clothbound Classics hardcover! This translation is by Geoffrey Wall.

WHEN I Discovered This Classic
Madame Bovary is one of those classics that I don’t really remember not knowing existed, but at the same time, I had no idea what it was actually about. Then I saw there was a Clothbound edition so I looked it up and my curiosity was piqued. Plus, Flaubert was put on trial for this book’s obscenity so yeah, sold.

WHAT Makes It a Classic
Madame Bovary is often stated to have revolutionised the form of the novel. It’s a seminal piece of realist fiction and was praised on high by Marcel Proust, Henry James and Vladimir Nabokov among others.

WHAT I Thought of This Classic
Emma Bovary is trapped in a boring marriage to a doctor and feels constrained by small town life. She longs for adventure and romance, and her liking for novels whose heroines get just that, and which leads her into debt and passionate affairs.

Going into Madame Bovary, I thought I knew what to except, but within the first few pages those expectations were turned upside down. The novel isn’t from the perspective of Emma like I was anticipating, but the first few chapters were actually all about Charles Bovary from birth up until marrying Emma. Then the perspective flits around throughout the novel in close up third which was sometimes a little disconcerting and it tended to be in those chapters that my attention waned. There were whole scenes about the countryside, politics of the little town the Bovarys live in and the ramblings of others in the town.

Emma is a fascinating character and I’m not surprised that it was only when the focus was on her that I was interested in the novel. When we met Emma she wass quiet, beautiful and naïve, expecting her relationship with Charles to mirror the love affairs of the novels she devours. Emma’s journey over the novel was fascinating. She became selfish, driven by desire and what she thinks she deserved. Nothing about love is what she anticipated: she expected the luxury, the passion, the wealth, the excitement of love that present in novels (I know them feels). So she made it herself outside of her marriage. She spent so far beyond her means it made me cringe, had two love affairs that proved her naïve and heart-breakingly desperate for someone or something vibrant and exciting enough to distract her from mundanity.

My boredom in the sections of the novel that explores provincial life made me appreciate Emma’s reaction to her life in a way. It gave the story a really interesting parallel. As a woman in the mid-19th Century, there’s not much to distract you from the dullness of day to day life; in fact, you’re supposed to embrace it as your domain. Emma’s interest in her house, husband and daughter was sporadic and usually provoked by an altercation with Charles’s mother or something to do with her affairs.


I'm hoping to start my February classic tonight for the #2016ClassicsChallenge! My pick for this month is Madame Bovary by Gustave Flaubert.
A photo posted by Sophie (@solittletimeforbooks) on Feb 2, 2016 at 7:09am PST

I know Madame Bovary is seen as an early feminist work by some, and though I understand the grounding for those comments, it didn’t feel that way to me. Women having sexual desires and being bored and restrained by societal values wasn’t yet widely written about in the mid-19th Century, especially by a male writer, and that in itself needs to be celebrated, but a lot of the story was also taken away from Emma in my opinion. Her rebellions entrapped her further and caused a tragic ending. To me that reads: if you want love, sex, wealth and happiness in your life then you’re probably going to pay extreme consequences. Half of her wants were inaccessible to a woman of her time without a husband providing them. I guess, it does highlight that issue and I do wonder whether that was taken by readers at the time.

As Emma’s activities gained traction, the tragic ending felt inevitable, but I was still surprised by the consequences. I actually had part of the ending spoiled for me while reading an article on anti-Valentine’s reads from one of my favourite authors! And yeah, I know it’s nearly 160 years old, but a spoiler is still a spoiler. I do wonder if I wouldn’t have been so eager to just get it finished if I didn’t know the end, but I did, and I was ready for it to be over for at least the last third of the novel. I was fed up with Emma and Charles, to be honest!

Madame Bovary is a really interesting book and I'm glad I read it, but it really has confirmed for me that anything even verging on pastoral is so not for me!

WILL It Stay a Classic
Yes. Though it wasn’t 100% my cup of tea, it is an enjoyable novel and an easy to read one. It also has a literary legacy that you just can't really argue with.

WHO I’d Recommend it To
- Those who have heard it’s a feminist novel – I want to know your thoughts!
- Fans of Thomas Hardy’s pastoral settings.
- Fans of unlikable characters.