Mini-Reviews: You're Never Weird on the Internet (Almost), The Long Way to a Small, Angry Planet & Speaking in Bones 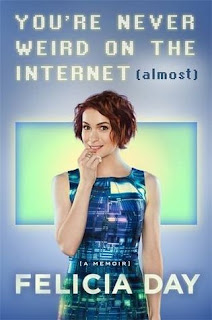 Synopsis
The Internet isn’t all cat videos. There’s also Felicia Day – violinist, filmmaker, Internet entrepreneur, compulsive gamer and former lonely homeschooled girl who overcame her isolated childhood to become the ruler of a new world…or at least a semi-influential in the world of Internet geeks and Goodreads book clubs.

After growing up in the south where she was ‘homeschooled for hippie reasons’, Felicia moved to Hollywood to pursue her dream of becoming an actress and was immediately typecast as a crazy cat-lady secretary. But Felicia’s misadventures in Hollywood led her to produce her own web series, own her own production company and become an Internet star.

Felicia’s short-ish life and her rags-to-riches rise to Internet fame launched her career as one of the most influential creators in new media. Now, Felicia’s strange world is filled with thoughts on creativity, video games, and a dash of mild feminist activism – just like her memoir.

Hilarious and inspirational, You’re Never Weird on the Internet (Almost) is proof that everyone should embrace what makes them different and be brave enough to share it with the world, because anything is possible now – even for a digital misfit.

Mini-Review
I’ve had You’re Never Weird on the Internet (Almost) since it came out and kept looking at it longingly. I finally dove into it for Non-Fiction November and I loved it.

I had a few Audible credits so once I realised the audiobook was read by Felicia herself, I knew I had to listen to it rather than read my physical copy. What a good decision! Felicia’s narration is completely brilliant; easily one of the best audiobook readings I've ever listened to. She’s just as charming, funny, witty and gloriously nerdy as I had hoped and I definitely finished the book with a total girl crush.

Nothing is glossed over, except maybe playing Charlie on Supernatural which is only mentioned once or twice. Felicia discusses her experiences of being homeschooled and how it led her to gaming and finding a community of likeminded people online who became friends, going to university at 16 and doing everything in her power to secure a 4.0 GPA and then moving to LA to become and actress and writing The Guild. But Felicia also shares the in between bits. She’s suffered from depression and anxiety throughout her career and experienced the loving online community she’s a part of turn into something that scared her during Gamergate.

You’re Never Weird on the Internet (Almost) was everything I wanted and more. Felicia’s achievements are motivating and empowering and I’m excited to see what else she does. 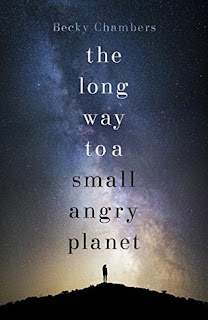 Synopsis
When Rosemary Harper joins the crew of the Wayfarer, she isn’t expecting much. The Wayfarer, a patched-up ship that’s seen better days, offers her everything she could possibly want: a small, quiet spot to call home for a while, adventure in far-off corners of the galaxy, and distance from her troubled past.

But Rosemary gets more than she bargained for with the Wayfarer. The crew is a mishmash of species and personalities, from Sissix, the friendly reptilian pilot to Kizzy and Jenks, the constantly sparring engineers who keep the ship running. Life on board is chaotic, but more or less peaceful – exactly what Rosemary wants.

Until the crew are offered the job of a lifetime: the chance to build a hyperspace tunnel to a distant planet. They’ll make enough to live comfortably for years…if they survive the long trip through war-torn inter-stellar space without endangering any of the fragile alliances that keep the galaxy peaceful.

But Rosemary isn’t the only person on board with secrets to hide, and the crew will soon discover that space may be vast, but spaceships are very small indeed.

Mini-Review
I completely and utterly loved The Long Way to a Small, Angry Planet after only a few pages and I just fell more and more in love with it as I read on.

If I could, I would make this review several paragraphs of emojis, alternating between hearts, heart eyes and the beaming smiley face. I'm pretty new to sci-fi, but I still never would have imagined that a novel set in deep space with a crew doing a crazy-dangerous job (punching wormholes between planets/zones for easy travel) would be so warm and easy to read. I smiled for the entire novel, well, except for the little bit at the end where I got all teary, of course.

One of the things about Becky Chambers’ debut that made it so warm for me was the way that diversity among the hundreds of different alien species that exist in the GC (Galactic Commons). Although there were prejudices, dislikes and inevitable prejudices, the overwhelming feelings about the differences between races and species is one of curiosity and acceptance. That is a desperately needed message in a world right now and the length of the differences, and the similarities, should hopefully hammer home how utterly ridiculous it is to have the prejudices that people do in comparisons. Some of the aliens have even altered themselves to allow communication between them.

The crew of the Wayfarer are brilliant. They felt like a family and I felt a part of that by the end of the novel; I knew each character and they were wonderfully distinct and vivid. Kizzy, Jenks, Sissix, Lovey, Ashby, Corbin, Dr Chef, Ohan and Rosemary are a mishmash bunch who bicker, but really love each other. So lovely! I know that Becky Chambers is currently writing a companion novel to The Long Way to a Small, Angry Planet and though I'd be happy to see more of the world, I'd really love to be back with these characters.

This book is one of my favourites of the year and I can't recommend it highly enough. Warm, funny and brilliantly imagined. 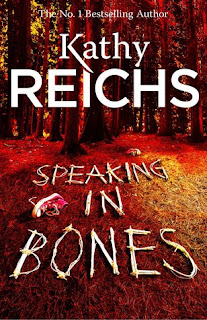 When forensic anthropologist Dr Tempe Brennan is approached by amateur detective Hazel ‘Lucky’ Strike, at first she is inclined to dismiss the woman’s claims that she's matched a previously unidentified set of remains with a name.

But as the words of a terrified young woman echo around her office from an audio recorder fond near where the bones were discovered, something about the story won't let Tempe go.

As Tempe investigates further she finds herself involved in a case more complicated and horrifying that she could ever have imagined.

Mini-Review
I've been a long time fan of Kathy Reichs’ Tempe novels, but it’s been a good few years since I jumped back into her world of science, murder and danger.

Being back in Charlotte with Tempe and her convoluted, dangerous cases was so lovely and familiar, even with the gap of five books and as many years. The cases in each book as separate and complete within themselves, but of course Tempe’s life moves along in the background, particularly her relationship with Detective Ryan (*swoon*). I'd missed a fair bit of development in their relationship but it was easy to get back up to speed and I didn’t feel like anything was lacking having missed out a few instalments. I really loved the developments they experienced in Speaking in Bones; it felt like a culmination of many years and many books in a nice resolution from them both.

I actually feel like Tempe’s personal life – with her mum being back in North Carolina and causing trouble and her issues with Ryan – saved the novel for me. I'd never realised how repetitive and formulaic Reichs’ novels are until I discussed them with my auntie and then read this. Each chapter ends on a cliffhanger, there’s a distinct process to the developing case, no one believes what Tempe’s realised about the murder/murderer and then she nearly gets herself killed. After 18 books her colleagues should really trust her instincts at this point and she should have learned not to do stupid things. It got on my nerves a little.

As always, the case in Speaking in Bones was complicated, surprising and tackled other issues within it. There is a lot of religious branches of Catholicism, zealots and exorcisms gone wrong in this book and I do find it interesting when approached this way, even though I generally don’t enjoy religion in books. I guess Tempe’s feelings about it align with my own and the nature of their involvement with the case which made it easier to read.

Even though I ended up enjoying Speaking in Bones, I no longer feel guilty about neglecting this series for so long and I won't be rushing to catch up, though I'm sure it’ll happen eventually.