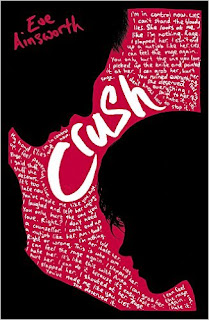 Other Titles by this Author: 7 Days

Love hurts…but should it hurt this much?

Reeling from her mum’s sudden departure, Anna finds the comfort she needs in her blossoming relationship with Will. He's handsome and loving, everything Anna has always dreamt with. He’s also moody and unpredictable, pushing her away from her friends, her music. He wants her to be his and his alone. He wants her to be perfect. Anna’s world is closing in. but threatening everything is dark secret that not even Will can control…

Ever Ainsworth’s second novel is a pitch-perfect exploration of love at its most powerful, addictive and destructive.

Eve’s debut, 7 Days, was an honest and emotional look at bullying and in Crush she continues her unflinching look at teenage life with a focus on damaging relationships.

When Anna meets Will she’s lonely, stressed and angry after her mum leaving has left her family fractured and her being pushed into the role of ‘mum’ by her dad and younger brother. Will is gorgeous and popular and he likes her. She fell hard and she fell fast, and he quickly becoming the focal point of Anna’s world. The intensity of their relationship soon changes from something sweet and identifiable as heady first love into something more sinister.

But once again, Eve shows the story from both sides. Though the novel is mostly narrated by Anna, Will has snippets from a journal at the end of each chapter, revealing bits of his life that he’s kept from Anna and the thoughts behind his actions. At first, it seemed unconscious. He didn’t realise that he was doing anything odd with Anna – even though the reader could see him pulling her away from her friends, controlling what she did, said, ate, what she looked like. His life was spiralling out of control and Anna was something he felt he could control, but it soon become something intentional and cruel.

I’ve always been a big fan of dual narrative. I love hearing from both sides, finding out motivations and what a character is really thinking and feeling, and I think Crush would have been a very different, and less effective novel, without it. Though Will’s actions are never excusable, I still think it’s helpful to see the motivations and the situation behind it. Nothing is black and white and there are few people that are straight up good or bad and, like with 7 Days, it’s important that teens know that too. Though they may see themselves as victims, it doesn’t mean that the people hurting them aren’t victims too.

Crush is a powerful and important novel about loss, anger, loneliness and strength. I think Eve has a really strong career ahead of her.