The Abyss Surrounds Us, Emily Skrutskie 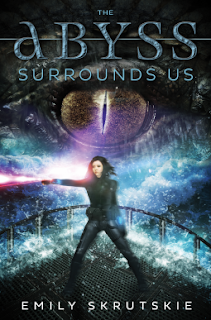 For Cassandra Leung, bossing around sea monsters is just the family business. She’s been a Reckoner trainer-in-training ever since she could walk, raising the genetically engineered beasts to defend ships as they cross the pirate-infested NeoPacific. But when the pirate queen Santa Elena swoops in on Cas’s first solo missions and snatches her from blood-stained decks, Cas’s dream of being a full-time trainer seems dead in the water.

Waiting for her on the pirate ship is an unhatched Reckoner pup. Santa Elena wants to take back the seas with a monster of her own, and she needs a proper trainer to do it. She orders Cas to raise the pup and teach him to fight for the pirates. If Cas fails, her blood will be the next to paint the sea.

But Cas has fought pirates her entire life. Santa Elena has no idea what she's in for.

When I was recommended a sci-fi/fantasy/pirate adventure I had no idea what to expect, but I was excited. The Abyss Surrounds Us was really unique, engaging and quite brilliant, actually.

Emily Skrutskie has created a fascinating world. It’s a sci-fi, futuristic version of our world where the leading nations (China, the US etc) have been divided into republics to help governments look after people better; the waves are ruled by pirates; and genetic engineers have created behemoth sea monsters (Reckoners), bred to protect their vessels and destroy those of the pirates. Cool, huh? In the beginning, it all seemed pretty clear cut: Cas and her family of Reckoner trainers are the goodies and the thieving, murdering pirates are the baddies, but once Cas is captured by a pirate crew and begins to learn of their lives, the waters begin to muddy. I loved that moral ambiguity, the feeling of a giant grey area. No person involved in any of the endeavours in The Abyss Surrounds Us was purely good or bad, though there were good and bad motivations, of course. It felt really refreshing and kept me on my toes!

As well as wonderful world-building, Skrutskie’s debut kicked it out of the park when it came to diversity. Cas has Chinese heritage, I imagined Santa Elena as non-white and there were actually native Pacific Islanders who I have never seen represented in fiction before, let alone in a YA fantasy. See, that’s how it’s done! The whole supporting cast in general was fantastic. Distinct characters with quirks and relationships and histories all in the background to Cas’s story and I’d be genuinely interested in getting to know them better as the series progresses. After the shock ending of The Abyss Surrounds Us, I imagine book two is going to be very different from the first and should give us a chance to explore the world more.

I’m especially looking forward to seeing more of Cas and Swift together. I loved reading their relationship. The dynamic between them is an interesting one, and I loved that they acknowledged and respected it: there can’t be true equality in a relationship between a captor and a prisoner and as well as adding to the tension between them, it really helped define them as characters. They moved from resentment to grudging respect to friendship to something more in a really organic way. Their relationship was changeable and authentic, balancing on the knife edge that they themselves were put on. Swift alone added a really challenging dynamic to it: she’s torn between upholding the orders that could make or break the career she’s fought for and the burgeoning feelings for Cas which could topple everything. It made every interaction between them so interesting.

I was so, so impressed by The Abyss Surrounds Us. Fantastic world-building, a truly unique premise and a deliciously meaty relationship; what more could have I asked for?

Thanks to Flux and NetGalley for the review copy.