Thanks for the Trouble, Tommy Wallach 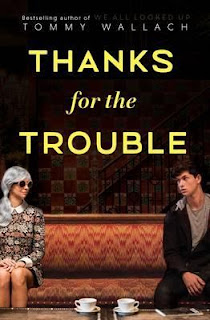 Other Titles by this Author: We All Looked Up

Parker Santé hasn’t spoken a word in five years. While his classmates plan bright futures, he skips school to hang out in hotels, killing time by watching (and sometimes stealing from) the guests. But when he meets a silver-haired girl named Zelda Toth, who claims to be quite a bit older than she looks, he’ll discover there just might be a few things left worth living for.

I didn’t really know what I was expecting from Thanks for the Trouble as I had mixed feelings about Wallach’s debut, but I ended up really enjoying it.

This book is written in a rally interesting style: the whole novel is the answer to the university admission essay question of the single most important experience of your life. The weekend during which Parker meets silver-haired Zelda who claims to be immortal is definitely that. The novel is all over the place in some ways: Parker switches between first and second person narration, uses direct address every so often, pops in memories and stories he’s written, as well as the main arc of the novel. It's really very cool and I enjoyed getting to know Parker that way.

For a good deal of Thanks for the Trouble I was a bit resistant to Zelda. She’s definitely a Manic Pixie Dream Girl for a long period of time for me: she’s ethereally beautiful, a complete mystery and a life experience for the male character. And though did develop so agency in the novel, she was still very much a MPDG in my opinion. It was a shame as I felt like she had a lot to give and wasn’t made the most of in the narrative. I was also really disappointed with how her story arc ended, so disappointed.

Wallach discussed mental health in a really interesting way in Thanks for the Trouble. It was very distanced in Parker’s narrative, but Zelda was very blunt about it which was refreshing. Parker’s journey and relationship with his illness is unlike anything I've read before: he's comfortable with it. He’s become used to his silence and uses it as a defense against the world and it takes him a long time to even make an effort to get help and so there was no sign of a miracle cure at the end of the novel. It felt much more natural in that way.

I was pleasantly surprised by how much I enjoyed Thanks for the Trouble and I’ll be keeping an eye on his future releases.