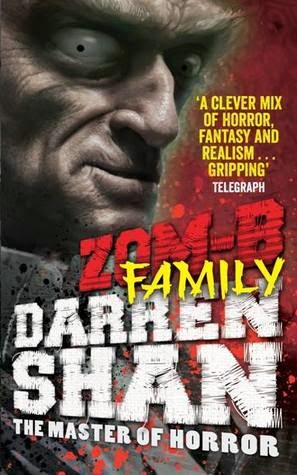 B has been taken hostage by Dan-Dan and his evil associates...who include her father. But someone is coming to her rescue...

‘What’s wrong, Daddy dearest?’ I simper. ‘Oh, that’s right, you can’t beat me up anymore, can you? Unless you want ot go get a plank to hammer me over the head with.’

‘Don’t say such things,’ he croaks, sitting again, looking on the verge of tears.

‘Why not?’ I shout. ‘You never gave a damn about me really. And what happened to Mum? You haven’t mentioned her. If you’re such a big family man, that’s the first thing you would have told me. Go on, Dad, let me have it. Did you look for her? Did she even cross your mind?’

‘And?’ I whisper when he doesn’t continue, fearing the worst, sure he’s going to tell me he couldn’t find her or that she was dead when he got there. Instead he shocks me.

It’s no secret that I love this series, but I still kind of expected my enthusiasm to wane after nine books. Nope. Zom-B Family is perhaps the best so far.

At the end of Zom-B Clans, B’s dad makes a surprise appearance; more a surprise because it was assumed he was dead, even by B herself. There wasn’t a lot of direct interaction between B and her dad before she was turned and the rest of the series continued so it was really interesting, especially as it allowed me to see what he was really like after everything B had shared. Watching her struggle with her love for her dad and her hatred for his racist, bigoted beliefs and subsequent actions was wonderfully done. It was some of the most emotion we’ve had from B in the entire series and really showed how far she had come. It’s not often that becoming a zombie improves a person, but that’s what it did for B.

But being reunited with her dear old dad meant something horrible for B: held hostage in the power plant under the control of Dan-Dan. He’s an evil, sadistic human being, but until Zom-B Family how true that is wasn’t quite realised... Dan-Dan had long promised that B’s end in his hands would be slow and painful and he really wasn’t joking. The things that he inflicted on her at first made me squirm and then I felt physically sick. Never has a book given me such a visceral reaction like that. As I tweeted while reading it: Master of Horror, indeed. Zom-B Family is by far the goriest book of the series.

As well as some scary beliefs from B’s dad and horrific torture, the ninth book in the Zom-B series also delivered a few answers. We finally figured out the true events leading up to the zombie apocalypse and exactly how it occurred (which by the way is a terrifying idea as it could very easily happen in our world with no one knowing...), the allegiances of Owl Man and further light on his partnership with Dr Oystein and there were also hints that in the next book, Zom-B Bride, we might even discover what the creepy as hell Mr Dowling is up to. Well, I hope so anyway.

As always, I finished Zom-B Family eager to dive into the next book so I’m very glad I don’t have too long to wait. All series should come out in quarterly instalments; it really is an excellent way to read.