Lies We Tell Ourselves, Robin Talley 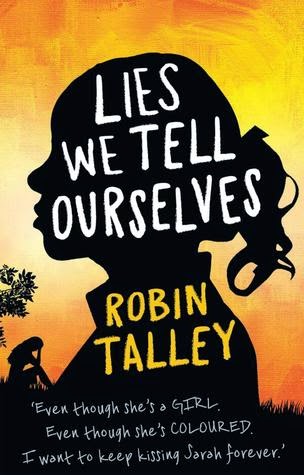 The battle for civil rights is raging.

And it’s Sarah Dunbar’s first day of school, as one of the first black students at the previously all-white Jefferson High School.

No one wants Sarah there.

And certainly not the students – especially Linda Hairston, daughter of the town’s most ardent segregationist.

Sarah and Linda have every reason to despise each other. But as a school project forces them to spend time together, the less their differences seem to matter. And Sarah and Linda start to feel something they’ve never felt before. Something they’re both determined to ignore.

Because it’s one thing to stand up to an unjust world – but another to be terrified of what’s in your own heart.

All I’ve been hearing for the last month or so is how bloody good thins book is. But also how affecting and powerful Sarah and Linda’s story is; I can’t say I disagree!

I have to admit that I was a little worried that Lies We Tell Ourselves was taking on a little too much: a lesbian relationship between a white and a black girl in 1959 during the early days of desegregation. Hmm. Strangely, it worked. The focus, of course, was the reaction the first ten black students to attend Jefferson High in Virginia. The treatment that they received made me feel sick. Verbal, physical and mental abuse from students, parents and teachers. I think that one of the worst things is that the ignorance of the children was inherited; they were spouting what they had been taught to spout. Linda was definitely the finest example of this.

Linda and Sarah shared the narrative of Talley’s debut, exposing the ignorance, confusion and hatred that a white teenager felt about a black one. I loved watching her thoughts evolve and grow. It was so realistic, right down to the second-guessing of her own thoughts and realising that she may be wrong, and the fear of admitting that to herself and those around her, but particularly her white supremacist father. Her developing feelings for Sarah were a lesser part of her narration but they were definitely there, and I think furthered her severe reactions to Sarah in the beginning. Sarah, having realised her ‘sinful’ feelings for girls years before, was a lot more open about her reaction to Linda. Their relationship was surprisingly touching and I loved the soft and slow burn of it; anything else would have been incredibly unrealistic and a little too much on top of the racial issues in the novel.

Sarah’s feelings led her to question her faith, and so did the treatment she and her friends received at Jefferson High. And I loved that that was an element of the story. How could He let them be treated as if they were less when He created them too? How could something He described in the Bible be so wrong, along women lying with women is never explicitly mentioned, feel so right and make her so happy?

Though homosexuality isn’t the strongest theme in the novel, it carries a heavy message. If the attitudes to the LGBT community are changed and accepted soon, there is the possibility that what happened during desegregation, and our horror at that, could be something our children are looking back on with the horror and disgust that we see this period with.

Though I can’t quite say I enjoyed read Lies We Tell Ourselves; it was too painful to read to be enjoyable, it’s an incredibly powerful and important book and I really hope it makes it into schools.

Thanks to NetGalley and MiraINK for the review copy.