Tell Me Again How a Crush Should Feel, Sara Farizan 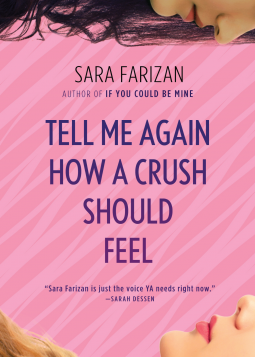 Other Titles by this Author: If You Could Be Mine

High school junior Leila has made it most of the way through Armstead Academy without having a crush on anyone, which is something of a relief. Her Persian heritage already makes her different from her classmates; if word got out that she liked girls, life would be twice as hard.

But when a sophisticated, beautiful new girl, Saskia, shows up, Leila starts to take risks she never thought she would, especially when it looks as if the attraction between them is mutual.

Struggling to sort out her growing feelings and Saskia’s confusing signals, Leila confides in her old friend, Lisa, and grows closer to her fellow drama-tech crew members, especially Tomas, whose comments about his sexuality are frank, funny, wise, and sometimes painful. Gradually, Leila begins to see that almost all her classmates are more complicated than they first appear to be, and many are keeping secrets of their own.

After falling in love with Sara Farizan’s incredibly powerful debut, If You Could Be Mine, last year, Tell Me Again How a Crush Should Feel went straight onto my must-read list. I definitely made a good call, there.

Though a short read, Sara Farizan’s second novel has as much impact as her first. The story of a teenage girl of Iranian heritage dealing with her first crush on a girl a refreshing take on an LGBT novel. Leila’s story begins not in a place where she is still questioning her sexuality, or just discovering that she is gay, but at a time where she knows who she is, she’s just not quite ready to announce it to the world. And face the consequences from her family! I really liked this approach; it was unexpected.

Leila’s take on her own sexuality also somewhat lessened the focus on her feelings being for a girl. She was just a teenage falling or someone. There was awkwardness, fumbled attempts at a connection, ding everything in your power to be in that other person’s vicinity without the usual self-censure of a character fighting or denying their feelings. But this also fell into Leila’s character. Not one of the cool kids, but a joker, prone to excellently witty one-liners and internal comments that made me snort – she’s hilarious. Leila alone would propelled me through the novel; I want to be her bestie. She’s so genuine, and I feel like a lot of misfit teenagers will empathise with her whether they are gay or straight and that’s important in an LGBT novel, I think. No one should be alienated from the characters or view them differently because of who they fancy.

Tell Me Again How a Crush Should Feel has a very strong love interest. Saskia is an interesting character and I loved the uncertainty and mystery that surrounded her from the off – you just never know what will come of her relationship with Leila and it kept me on my toes. Their story took an unexpected turn and I was really pleased with how it evolved. It could so easily have been a run of the mill I-like-you-and-you-like-me story, but it went on a satisfying detour.

Sara Farizan’s second offering is heart-warming and empowering while staying a cute, funny and utterly readable story of a girl falling in love. This woman deserves a lot more notice than she’s getting.