Not That Kind of Girl, Lena Dunham 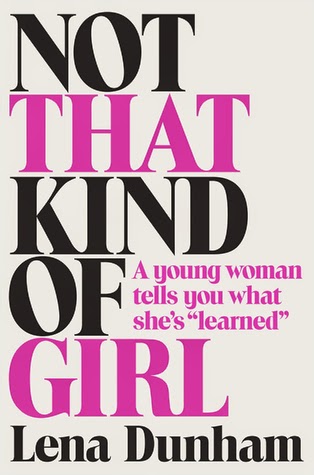 From the acclaimed creator, producer and star of HBO’s Girls comes a hilarious, wise, and fiercely candid collection of personal essays that establishes Lena Dunham as one of the most original young talents in writing today.

In Not That Kind of Girl, Dunham illuminates the experiences that are part of making one’s way in the world: falling in love, feeling alone, being ten pounds overweight despite only eating healthy food, having to prove yourself in a room full of men twice your age, finding true love, and, most of all, having the guts to believe that your story is one that deserves to be told.

Exuberant, moving, and keenly observed, Not That kind of Girl is a series of dispatches from the frontlines of the struggle that is growing up. “I’m already predicting my future shame at thinking I had anything to offer you,” Dunham writes. “But if I can take what I’ve learned and make one menial job easier for you, or prevent you from having the kind of sex where you feel you must keep your sneakers on in case you want to run away during the act, then every misstep of mine will have been worthwhile.”

I’ve only seen a few episodes of Girls, but those and everything I’ve read from Lena on the interwebs was enough to make me realise that I had to read Not That Kind of Girl.

Instead of a traditional memoir, Not That Kind of Girl is a collection of incredibly personal essays and lists all under topic sections. Because of the style of this book, the narrative isn’t linear by any means. It flicks back and forwards from her early childhood to during the filming of the first season of Girls and it occasionally feels a little jumpy as there are so many people mentioned in her essays that when we jump from different times in her life without confirming the person involved, it can be a little confusing.

Dunham is unflinchingly honest in the stories she tells and in the lessons she gives; no stone is unturned when it comes to what she has learnt about sex, her body, feminism, relationships, friendships and generally how to take ownership of herself as a young woman in the society we have. Her stories are at once funny and sad, cringey and heart-breaking, but they are all warmly and genuinely told. Her voice shines through clearly and definitively. Though it’s obvious that she doesn’t always feel it, Lena is brave and bold and complex and I respect her endlessly.

I came out of Not That Kind of Girl with a conviction to turn my unhappiness into happiness, or at least use whatever I’m feeling and experiencing creatively. Lena Dunham’s debut is strong, passionate and incredibly sharp and I really hope there’s more from this talent.