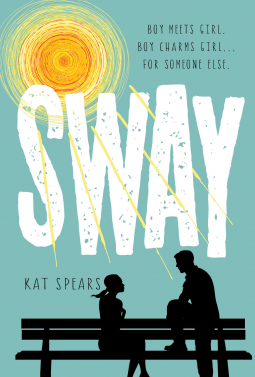 High school senior Jesse Alderman, or Sway as he’s known, could sell hell to a bishop. He also specialises in getting things people want – term papers, a date with the prom queen, fake IDs. It’s all business with Jesse. He has few close friends and he never lets emotions get in the way.

But when Ken, captain of the football team, leading candidate for homecoming king, and all around jerk, hires Jesse to help him win the heart of the angelic Bridget Smalley, Jesse finds himself feeling all kinds of things. While following Bridget and learning the intimate details of her life, he falls helplessly in love for the first time. He also finds himself in an accidental friendship with Bridget’s younger brother who’s belligerent and self-pitying after spending a lifetime dealing with cerebral palsy. Suddenly Jesse is visiting old folks at a nursing home in order to run into Bridget, and offering his time to help the less fortunate, all the while developing a bond with this young man who idolizes him. The tinman really does have a heart after all.

A Cyrano de Bergerac story with a modern twist. Sway is told from Jesse’s point of view with unapologetic truth and biting humour. His observations about the world around him are untempered by empathy or compassion – until Bridget’s presence in his life forces him to confront his quiet devastation over a life-changing event a year earlier, and maybe, just maybe, feel something again.

I plucked Sway from Goodreads purely because of the cover and the fact that it was a modern retelling of the story of Cyrano de Bergerac, and though it didn’t blow me away, it’s a solid, interesting debut.

Sway is written from the perspective of Jesse, or Sway as some people annoyingly name him. His narration is unflinching and honest and strangely void of much emotion. It’s a fascinating perspective because he’s actually kind of an asshole for most of the novel, and yet he remains likable and I was championing him throughout the novel. I always find a teenage boy’s boys refreshing as it has such a different tone and different focuses to a YA heroine and Jesse has one of the most distinctive voices I’ve come across in a long time.

He’s had a difficult year and it doesn’t seem to be getting any easier. He doesn’t have any friends, just acquaintances and business associates. He doesn’t have a heart. And then he gets to know Bridget Smalley. I loved how gradually he thawed, the minor changes in his actions and how he thought – it was so subtle that he barely noticed it himself at first and when he did, he denied it furiously to those who noticed it too.

Throughout the novel, Jesse forms alliances with two unlikely characters, Pete and Mr Dunkelman, and their interactions were by far my favourite interactions. They were brash and open with each other, sometimes harsh, but they always revealed the truth of each other. Jesse didn’t pander to Pete’s cerebral palsy or Mr Dunkelman’s age and infirmity; their connection was based purely on personality and their aloneness.

Sway is a strong debut with interesting characters and an intriguing narrator. A quick, easy read.

Thanks to NetGalley and St Martin’s Griffin for the review copy.