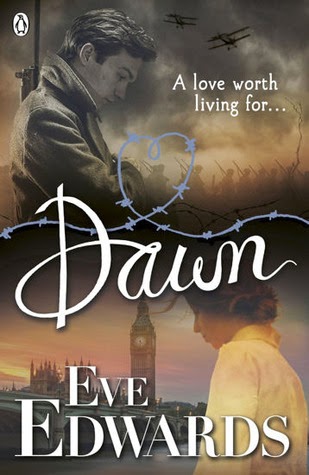 Other Titles by this Author: The Other Countess, The Queen’s Lady, The Rogue’s Princess, Dusk

Sebastian reached in his pocket for the portrait of Helen he had drawn only last year. ‘I’m looking for a young lass who came through here last night.’

In the midst of the First World War Helen Sandford, a young nurse, has disappeared. Sebastian Trewby is determined to find her so that he can protect her before his flight squadron calls him back for duty.

Helen knows that if Sebastian discovers her it could ruin him. Society wants to persecute her for her German heritage and she is threatened at every turn. Her only hope lies with those that love her, and the authorities are closing in...

I was a little frustrated by the ending of Dusk so my eagerness to start Dawn was slightly less than it should have been. But once I got stuck in, I loved it.

Dawn is written in a non-linear timeline that can occasionally throw you: the story jumps between the perspectives of Sebastian and Helen and from the end of Dusk 1916 to the end of the war in November 2018. It’s a challenging way to tell the story, but, I think, a necessary one. The jumping in time keeps mystery, but also perspective; it throws up the chaotic feeling of expecting the unexpected of war. It’s the perfect backdrop for Helen’s experience of being persecuted for her heritage by the scared, desperate, panicking British public during a time when it felt like they couldn’t do anything so they had to do something. It was a horrible thing to read, the steady degradation of a strong, clever and determined woman at a moment in history when that was needed most.

I was surprised at how strongly Dawn evokes the atmosphere of Britain at war. The mundane actions of ordinary life against the absurdity that Sebastian experienced on the front in Dusk; even Sebastian’s new role of patrolling the skies over enemy lands became routine when he could be shot down at any moment. It also cements the feeling that nothing will ever be the same after this; everyone and everywhere will be forever different.

Helen and Sebastian’s adventures introduced us to a few new characters that captured by heart in Dawn, but mainly Aunt Dee-Dee and Charlie. Aunt Dee-Dee is a woman before her time: a trouser-wearing, marriage-eschewing, sculpting new woman. She’s absolutely brilliant and I adore her. No question about it. Then came cheeky Charlie, one of Sebastian’s fellow pilots: desperate for love, no real personal need to fight in the war and just desperate to get home. He’s a real catch and I loved all of his efforts to bring regular life onto the battlefield. Oh, and he’s Aunt Dee-Dee’s nephew.

Dawn is heartbreaking, compelling and realistic historical fiction and I loved it. I can’t wait to see what era Eve Edwards tackles next.