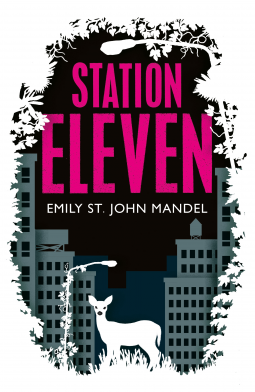 DAY ONE: The Georgia Flu explodes over the surface of the earth like a neutron bomb. News reports the mortality rate at over 99%.

YEAR TWENTY: A band of actors and musicians called the Travelling Symphony move through their territories performing concerts and Shakespeare to the settlements that have grown up there. Twenty years after the pandemic, life feels relatively safe. But now a new danger looms, and he threatens the hopeful world of every survivor has tried to rebuild.

STATION ELEVEN: Moving backwards and forwards in time, from the glittering years just before the collapse to the strange and altered world that exists twenty years after, Station Eleven charters the unexpected twists of fate that connect six people: famous actor Arthur Leander; Jeevan – warned about the flu just in time; Arthur’s first wife, Miranda; Arthur’s oldest friend Clark; Kirsten, a young actress with the Travelling Symphony; and the mysterious and self-claimed ‘prophet’.

Thrilling, unique and deeply moving, this is a beautiful novel about art and fame and about the relationships that sustain us through anything – even the end of the world.

For the last few months the literary world has been all a-buzz about Station Eleven and I just had to find out what all the fuss was about.

It’s unusual for a dystopian novel to be set so close to the apocalypse. Station Eleven tells the story of the Travelling Symphony in year twenty, two decades after the Georgia Flu brought civilisation crashing down. It was so refreshing to hear from characters you remembered the world before and could compare it to now, but there were also characters born after the collapse and the idea of a world with electricity, planes and fast food. I loved the contrast between them and how those who never lived in or don’t remember the old world marvel at what used to be possible while the others lament it.

The Travelling Symphony keep parts of the old world alive as they travel the territories of North America performing Shakespeare plays and orchestral symphonies in towns and settlements that never thought they would hear them again or had never heard them before. The idea of art, words and music surviving the end of the world, and helping people to survive the end of the world is wonderful.

Although I loved all of these elements of the novel, it didn’t blow me away like I was expecting it to. There were so many characters and they all come in at the same time; I honestly struggled to keep them straight in my mind and match them up to their relationships with each other and their experience of the collapse. Each character felt equally important in the narrative; there was no clear main protagonist, but that also made me not connect to any of them in particular. I just drifted between the perspectives aimlessly. I kinda feel like a I missed or misread something to not fall in love with Station Eleven.

This is a novel about love, family, friendship, art and hope in the face of the end of civilisation and although I didn’t love it as much as I wanted to, I reckon you will.

Thanks to NetGalley and Picador for the review copy.