A Little Something Different, Sandy Hall 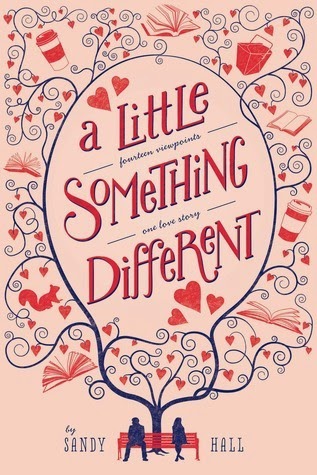 Lea and Gabe are a romance waiting to happen. They’re meant for each other, so how come everyone can see it but them?

Lea and Gabe are in the same creative writing class. They get the same pop-culture references, order the same Chinese food and hang out in the same places. Unfortunately, Lea is reserved, Gabe has issues, and despite their initial mutual crush it looks like they are never going to work things out.

But somehow, even when nothing is going on, something is happening between them, and everyone can see it. Their creative-writing teacher pushes them together. The baristas at the local Starbucks watch their relationship like a TV show. Their bus driver tells his wife about them. The waitress at the diner automatically seats them together. Now they just need to realize that they’re meant for each other, and start falling in love...

This irresistible romance is told by all the people who are willing love to blossom in a unique multi-voice narrative structure. It is perfect for fans of Rainbow Rowell and John Green.

I spotted A Little Something Different on Twitter one day and decided to have a look. I was immediately grabbed by the idea of a relationship explored by outside perspectives so I pre-ordered. And I’m so glad I did!

The fourteen-strong narrative was what intrigued me about this novel; I was really curious to see how strongly the relationship between Lea and Gabe came across when it was being explored from the outside. It totally works. You know that feeling of reading a novel where the protagonist and the love interest are so perfect for each other it hurts and they keep having near-misses? That’s what reading this is like, but up close. You’re reading what it’s like to be the bus driver wishing they get together, the teacher pushing them into close quarters, the best friend soothing the ache of the crush and the brother shoving you in the right direction. You’re right in the centre of the crush and it’s squee-inducing.

I was really worried at first that I wouldn’t feel connected to Lea and Gabe because of the distance in perspectives, but I finished A Little Something Different as if I had been championing a relationship between friends. The narrators switch it up and around in brief snatches of scenes, swapping to which ever perspective has the best view at that moment. You get to see every bit of each character’s journey rather than following just one character or only receiving the view of the inevitably clouded perception of the protagonists. I was expecting it to be fourteen chapters, one for each perspective, so I was pleasantly surprised to find this approach – I don’t it would have worked so wonderfully without it.

College as a setting for a YA novel is becoming more and more frequent with NA looking like it’s here to stay, and we all know how I fell about that, but I think that Sandy Hall has done it properly. And, honestly, how it should be - an age range not a sub-genre. I don’t want to NA focus on graphic sex and partying. I want the feeling of freedom and responsibility, becoming an adult, the pressure of university classes, managing your own money and growing into yourself during those three or four years. University was the best experience of my life so far, but also one of the hardest, and I like it when that comes across in novels. A Little Something Different does it in lots of ways. I’m really hoping that I continue to see college portrayed realistically more often.

A Little Something Different is cute, funny and inventive and exactly what it promises: a little something different. Highly recommended.