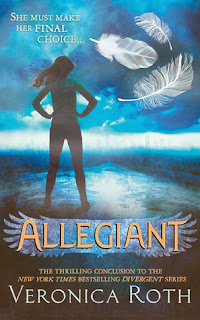 Other Titles in this Series: Divergent, Insurgent

The faction-based society Tris Prior once believed in is shattered – fractured by violence and power struggles and scarred by loss and betrayal. So when offered a chance to explore the world past the limits she’s known, Tris is ready. Perhaps beyond the fence she and Tobias will find a simple new life together, free from complicated lies, tangled loyalties and painful memories.

But Tris’s new reality is even more alarming than the one she left behind. Old discoveries are quickly rendered meaningless. Explosive new truths change the hearts of those she loves. And once again Tris must battle to comprehend the complexities of human nature – while facing impossible choices about courage, allegiance, sacrifice and love.

Told from a riveting dual narrative, Allegiant, by No. 1 new York Times bestselling author Veronica Roth, brings the Divergent series to a powerful conclusion while revealing the secrets of the dystopian world that has captivated millions of readers in Divergent and Insurgent.

While the rest of the blogosphere was completely freaking out about the impending release of Allegiant, I was wracking my brains trying to remember what had happened in Insurgent...

Now I adored Divergent. It was one of my favourite reads of 2011, and then Insurgent came along and I was a bit disappointed, but I still had my hopes up for Allegiant. I can honestly say that for most of the novel my feelings about it could be summed up with a simple ‘meh’.

I really loved the dual narrative as I remembered Tris irritating me in Insurgent. I was also really interested in seeing more of Four’s (I just can’t see him as Tobias...) internal personality after reading a few of Veronica Roth’s Four-orientated e-novellas, and he didn't disappoint. He’s such a complex character; complex in a way you could never see from Tris’ point of view. The only emotion I felt while reading this novel was through Four’s perspective and yet I still felt that most of the spark between him and Tris was missing for me. I didn't even really care about them as a couple anymore, and I wasn’t bothered about the city or the outside world or what everyone was hiding about anything anymore. I just wanted to get through it without being spoiled.

Allegiant couldn’t make me care about what was happening in Tris and Four’s world. I felt no shock, no horror, no disgust as atrocious acts by people in power were revealed or when Tris or Four announced stupid plans. There was just nothing there. The ending saved this novel for me. I’m not going to spoil it for anyone, but what Veronica Roth did was brave, unusual and true to her characters and I finally felt something! In fact, I got a little choked up over the last few chapters. The visceral emotion and vitality of the characters was back for me and I was so, so glad that it ended that way. I think I would have completely forgotten about Allegiant otherwise.

I’m so disappointed in Allegiant. I really hoped that it would pull back from Middle Book Syndrome but it didn't for me and it’s such a shame as Veronica Roth is such a wonderful writer. I hope she’ll bring me back in with her next novel.

Thanks to Harper Collins for sending me a review copy.