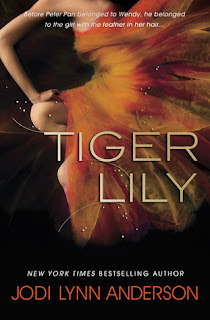 Other Titles by this Author: Peaches, The Secret of Peaches, Love and Peaches, Loser/Queen

This is a love story unlike any you’ve ever heard...

Tiger Lily doesn’t believe in love stories or happy endings...until she meets Peter Pan in the forbidden woods of Neverland. Immediately, she falls under his spell – holding him like a secret in her heart.

Peter is unlike anyone she’s ever known. Reckless and brave, he both scares and enthrals her. She will risk everything – her family, her future – to be with him.

But Tiger Lily soon discovers that the most dangerous enemy can live inside even the most loyal and loving heart.

I’ve been hearing whisperings of how beautiful Tiger Lily is for months and months so when I heard it was being released in the UK, I was rather excited. It surpassed those whisperings by miles.

Peter Pan is a story known and beloved all over the world so most retellings of it fall a little flat. They don’t have the magic and the wonder and the pure escapism and romance of the original, but Tiger Lily does. With all of the adaptations and the original works I never got a particularly strong impression of the character of Tiger Lily; she was just a background to Peter, Wendy and the Lost Boys’ adventures so it was great to see her come alive so vividly and intricately.

Tiger Lily is a character you can get behind. She’s an outside in her tribe and she’s not girly enough for the girls and not boyish enough for the boys. But she is strong, brave, rebellious and achingly loyal, though she’s far from perfect. I love that she struggled, that she doubted and that she did things wrong sometimes. Underneath all of her adventures with Peter, Tiger Lily as a literary character challenged gender roles in a subtle but impacting way and I really liked that. It’s the kind of thing that younger readers would absorb and take on without even noticing and I think that that is endlessly important. Her otherness secured her a life beyond the imagination of most of the other people in her tribe and she didn't let anyone smother her with it.

This attitude helped her form some of my favourite relationships in Tiger Lily. Her connection with Tink was something that I didn’t expect, as was the tiny, insect-like faerie being the narrator of the novel! There was a loyalty, a protectiveness between the two of them; a deep knowledge and understanding of each other that was paralleled only by Pine Sap, I think. And because of Tiger Lily’s timidity in trusting Peter, there was a slow intensity to their relationship which allowed me to watch them steadily fall in love and trust each other. It’s still something that’s a little unusual in YA, especially in fantasy, so it endeared me to the novel even further.

Jodi Lynn Anderson’s take on the characters, settings and lore of Neverland continued to impress and enrapture me as the Tiger Lily went on. I was particularly fond of her development of Tinker Bell. In most cases she’s seen as a jealous, vindictive and petty creature who only Peter Pan really likes, but she’s not that at all. I really enjoyed the idea that her hatred of Wendy wasn’t bound in her love for Peter but her love for Tiger Lily – I love me some girl power. Speaking of Wendy, I really didn't like her. I had wondered how and if she would be brought into the story and I loved how it was done. She’s the fragile, exotic and beautiful girl that was everything Tiger Lily wasn’t and everything that most of her tribe would have expected from a girl, but she was naive and irritating in a way that I can’t quite explain.

Wendy was part of the plague of Englanders that came to Neverland and nearly ruined everything for Tiger Lily’s tribe, the Sky Eaters. Phillip’s arrival and acceptance into the village started off as something wonderful but soon coalesced into what I imagine it was like for the Native Americans when the English landed. Their beliefs were told to be wrong, their culture not accepted by God and the way they conducted their life to be primitive. I hated the way that Phillip pushed his version of religion - straight up Victorian Christianity – onto the tribe and caused more trouble any of the tribe could have imagined as he forced his beliefs and ideals upon them. It hurt to read about.

Tiger Lily is an enchanting and richly imagined retelling of a treasured classic that I’ll be thinking about for a long, long time.

Thanks to Orchard for the review copy.