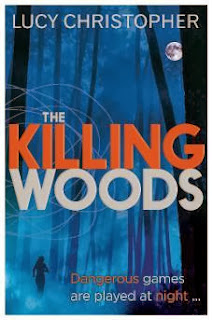 Other Titles by this Author: Stolen, Flyaway

Emily’s dad is accused of killing a teenage girl in the woods behind her house. She’s sure he’s innocent, but what happened? Determined to find out, Emily seeks out the boyfriend of the murdered girl. Maybe they could help each other.

But Damon has his own secrets about the dangerous games that are being played in the dark...

It’s no secret that I’m a massive fan of Lucy Christopher’s books so from the second I heard about The Killing Woods, I was excited. I’m pleased to say that my excitement was warranted – it’s fantastic.

I really didn't expect a split narrative from The Killing Woods but I loved it. Emily and Damon were so similar in their struggles, desperation and confusion but completely opposite in their outlooks that they contrasted each other perfectly. The short, sharp chapters really enforce the impact of their emotions and the general tension and intensity of the novel. I felt like I was held together by elastic while reading this; primed to snap at any time without warning, and I think the characters were too.

Lucy Christopher really managed to capture a distinct voice for both Emily and Damon. Emily’s view was softer, more poetic and written in the type of prose a novel usually is, but Damon thought and spoke like a teenage boy. His narration was peppered with innuendo, swearing and slightly off English that happens when you speak without thinking. He had loads of phrases where his speech patterns really identified him as a character.

Okay, so this review has been very writing/technique focused, but I think you can learn a staggering amount about writing from Lucy Christopher. She’s a master after only three books. The emotions of her characters were tangible, the tension had my heart in my throat and the mystery was causing me to read ahead of myself every couple of pages, even though I did guess which of the suspects had killed Ashlee.

The Killing Woods is another extraordinary book from Lucy Christopher. I couldn’t stop reading and when I had to, it was all I could think about. Beautiful and emotional.

Thanks to Chicken House for sending me a review copy.