Series' I Desperately Want to Finish


Over the years I’ve started many, many series’. I wait eagerly for each new instalment, pre-order my copy and devour it. But sometimes I put it off because there’s such a wait until the next one and they stack up. before I know it, there are four books are I’ve got at least half the series to read. Here’s a few series I’ve sadly fallen behind on and it’s one of my goals to finish them all next year.

Scott Westerfeld is one of my favourite authors and I loved the sound of his Steampunk trilogy, beginning with book one, Leviathan. Oh, the Clankers and the Darwinists. The machines and biological creations are extraordinary and Westerfeld painted such a vivid picture of Deryn and Alec’s world. Once Behemoth arrived I saved it for when I’d have time to savour it, but it never happened. Then Goliath came out and it happened again. One day... 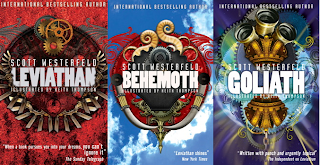 I received the first two books in Charlie Higson’s The Enemy series for review and loved the gory, zombie action. I then went to see Charlie at a Bath Kids Lit Festival event and bought book three in hardback but didn’t read it. Then a few weeks ago I got the last two books in the series for review. Now I have three books of awesome waiting for me to read straight through. Again, I’m waiting for the time to do so.

Michael Grant’s Gone series is fantastic and I loved it from the beginning. But the books are long. I have up to book four, there are six in the series and I’ve only read two. I have the first four in hardback so I need to go on in the same fashion, but hardbacks are expensive and I was a student so it just didn’t happen. One day.

Hush, Hush was one of my favourite books of 2009, but I was slightly less in love with Crescendo. The result was acquiring Silence and Finale with every intention of finding out what happened to Patch and Nora. Now it’s been so long that I don't really remember what happened so I’d have to re-read the series from the beginning and I just, once again, don't have time.

Sarah Rees Brennan’s Lynburn Legacy series is one of my favourites at the moment and it’s making me want to go back and finish of the Demon’s Lexicon trilogy. I liked the first book, but didn't love it. Now that I love her writing and style, I’m eager to get back into it. And I did develop a fondness for Nick... 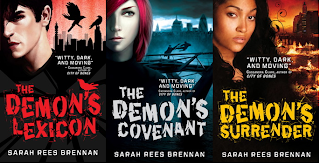 The last on this list (but I assure you, there are many more...) is the Beautiful Creatures series by Kami Garcia and Margaret Stohl. I loved the slow, sultry Southern summer vibe from these books. I wasn;t overly fond of either Lena or Ethan, but the atmosphere was enough to keep me going through those bricks of books! But once again, the length of the novels put me behind. I think I’ll take the final two books with me the next time I go on holiday to make sure I finish them!

Basically, I need an apocalypse that prevents me from ever leaving the house again so I can catch up with all of the series’ I fell in love with years ago. And everything else waiting on my shelves. It’s worrying that that idea actually appeals to me, isn’t it?

What series have you loved and then abandoned? Which should I finish first? How do you keep up with all of the series’ you start?