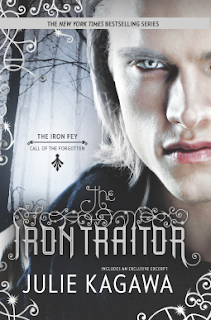 Other Titles by this Author: The Iron King, The Iron Daughter, The Iron Queen, The Iron Knight, The Immortal Rules, The Eternity Cure, The Lost Prince

But when your name is Ethan Chase and your sister is one of the most powerful faeries in the Nevernever, “normal” simply isn’t to be. For Ethan’s nephew, Keirran, is missing, and may be on the verge of doing something unthinkable in the name of saving his own love. Something that will fracture the human and faery worlds forever, and give rise to the dangerous fey known as the Forgotten. As Ethan’s and Keirran’s fates entwine and Keirran slips further into darkness, Ethan’s choice may decide them all.

I love Julie Kagawa’s faery world and the characters in it, but I still feel like there’s a spark missing from this series in comparison to The Iron Fey.

It’s strange. Meghan, Ash, Puck, Grim and other characters that I feel in love and hate with over the course of Kagawa’s original series still play a fairly major part in this spin-off and yet I still miss them. I tend to spend pages wishing for them to appear and take over almost. And yet I love Ethan and Kenzie so it just doesn’t make sense! Saying that, however, I don’t think that as a couple they have the same levels of chemistry or forbading over their heads that Meghan and Ash did that makes my heart ache for them; I have no burning desire for their interactions or anything. I just can’t figure out what’s missing from this series...

By about half way, The Iron Traitor takes us back into the Nevernever. Now I love the Nevernever, worryingly so, in fact. As twisted and dangerous as it is, I want to go there. I want to fight redcaps, have a mysterious conversation with a dryad and be on the receiving end of Grimalkin’s chargrin. It’s a beautiful, enchanting and exciting world that I want to leap straight into, especially the Courts. Gah. I really enjoyed the foray into the New Orleans Goblin Market as well. I’ve had a fondness for them for years so seeing one woven into a magical, old city and get to experience it through Julie Kagawa’s exquisite description was a pleasure.

As well as a gift for setting and description, Kagawa really knows how to make the feelings of her characters something visceral for her readers. One of my favourite elements of The Iron Traitor was Ethan’s feelings regarding the whole Meghan/Ash/Kierran family situation. Ethan’s confusion of feelings towards Ash and Kierran because they took his sister away from him is kind of heart-wrenching, especially as his loyalty and general tendency towards being a good person means he can’t help but care and want to help them. And, oh Kierran. I simultaneously love and hate him. At certain points he was so much like Ash it broke my heart, but a darker, more twisted Ash. He’s incredibly powerful and I was scared what would come of that pesky prophecy as I was reading the novel. then came the ending and I exclaimed a rather loud and horrified ‘What?!’ while I was on the Tube. I got a few odd glances...

Although this series isn’t my favourite, I love Julie Kagawa’s writing and this world so I’m still looking forward to the next instalment.

Thanks to MiraINk and NetGalley for the review copy.